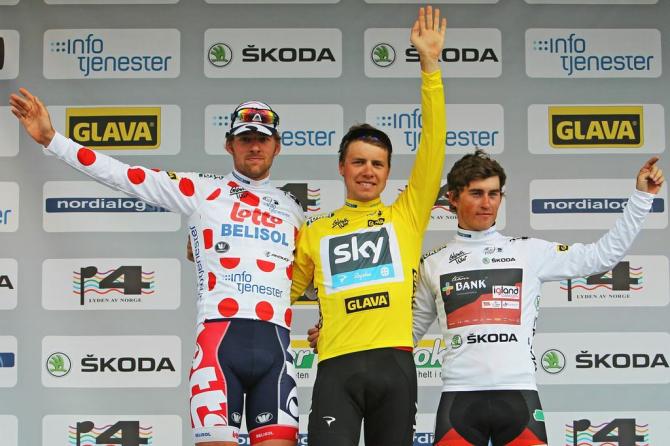 "Finally I’ve won!," yelled the Czech track specialist. "Being beaten by Metlushenko four days in a row, I was disappointed, but he’s in a really good shape. On the other hand, after I won four stages at the Tour of China, I think my form is going down. I feel a little bit tired. That’s why I’ve had to wait till stage 5 to find the way to win. Yesterday I made the mistake to launch my sprint from too far out, 300 metres before the line, so today I did the opposite: I waited for the last 50 metres and it proved to be the right tactic."

However, Metlushenko admitted that he could have avoided Kankovsky’s final rush.
"I’ve opened the door to Kankovsky on my left side," the race leader described. "I should have stayed near the barricades. The wind was blowing from the right. It’s my fault if I’ve lost by so little. We’re all on the same line."
The outcome of today’s stage was not always a given however. At one point, it appeared that Boris Shpilevskiy was going to take the victory, as the Russian rider had created a slight gap in the final 50 meters.
"But the wind blocked me," the Russian stated. "It was a fight against myself. It’s a good day for me with the time bonus I’ve collected. It’s a big job to stay in third place overall. I’d like to move up to second but it’s difficult with the physical condition I have now."

Tomorrow, the Tour of Taihu moves into the second half, with a 110.2 kilometer circuit from Changxing Longshan Xinqu to Taihu Tuying.

"We’ve passed the equator!," smiled Metlushenko. "It’s still an enormous satisfaction that I’m still in the lead at this point of the race."