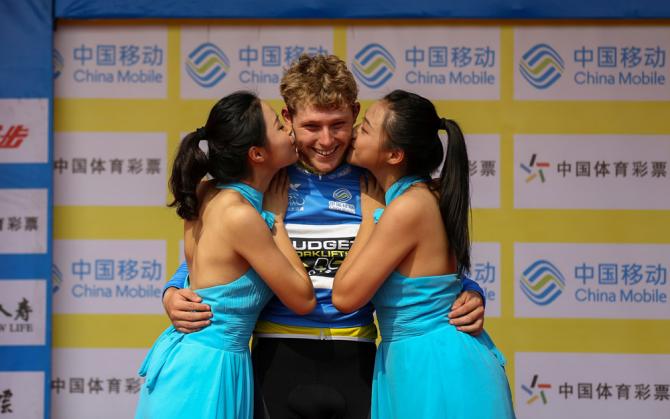 "At the end the result is good but it’s a little bittersweet as I wanted my first win in Asia to be normal," Kerrison said after discovering the revised results back at his hotel in Yixing. "But racing is racing and the commissaires decided that Alois moved over on me.

"I’m happy that I can finally repay my team for all their hard work. It wouldn’t have been possible without them. They have ridden like 10 men this whole Tour. Today we had one guy in the breakaway and we were leading the last kilometer. It makes me proud to say I ride for Budget Forklifts! Now hopefully I can get another win but under better circumstances."

"With three teams leading out and going from left to right, it was a really nervous last kilometer," said Kankovsky, who didn’t feel that he had done anything worse than the other sprinters. "I was positioned on fifth wheel, behind Yuriy, because his team was very strong in the finale. I knew I was at the right place for fighting for the podium and I had better legs than Yuriy today. Jesse also has a really strong team of young boys to help him. It could be any of us three winning today."

"My teammates have done all they could to catch this breakaway, it hasn’t been easy," Metlushenko said. "Sergey Grechyn still managed to bring me to the front of the bunch but there was a strong headwind to finish and I launched my sprint a bit too early. The last 30 or 50 meters seemed never-ending. I was exhausted. Jesse and Alois passed me.

"I can’t say it’s a bad day for me. It’s not bad to cross the line in third place against those two guys but after winning four stages, I don’t feel being where I should be. I’ve done all I could for winning.

"Fortunately, for one more day, I retain the lead in the overall and points classifications," Metlushenko added. "Tomorrow is another day. Although stages here are quite short and flat, after one month of racing in China I feel like having the Tour de France in my legs. We’re racing like it’s the third week of a Grand Tour."

The 9 day race is now down to the final three stages – with Metlushenko  leading Kankovsky in the general classification by 20 seconds.

"We have to keep our feet on the ground," said Kankovsky, a former omnium world champion. "Today, the breakaway was close to making it. The winner of the Tour of Taihu can still be someone else than one of the four sprinters."