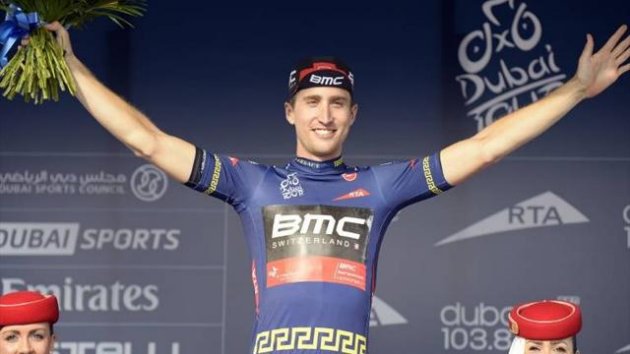 Marcel Kittel once again proved unstoppable, as the German sprinter scored a hat-trick today by winning stage 4 of the 2014 Dubai Tour in Burj- Khalifa. Meanwhile, Taylor Phinney held onto the blue leader’s jersey to claim the overall victory.

Kittel beat out Mark Renshaw and Andrea Guardini in a sprint finish. The German powerhouse so exerted himself in the sprint, that he was seen sitting on the pavement almost immediately after crossing the finish line.

“I’m super happy,” he said after the finish. “But I’m totally dead now. The final was really fast. I lost my boys at 2km meters to go, just before the bridge.

“It was amazing how Tom Veelers brought me back to the front. Like out of nowhere, the rest of the team where there to do the lead-out. I think that today we did a brilliant job as a team, a big thank you to my team.”

“It’s absolutely the best ever start for my in professional career for me so far. I did a great Tour last year and for sure that helped me in my development as a rider. It simply makes you stronger. I had some good training throughout the year and I’m super happy that can start with such good shape in 2014.”

Mark Cavendish was nowhere to be found at the finish, after he dropped his chain in closing few hundred meters. Meanwhile, his lead-out man, Renshaw, was left to contest the sprint. However, the Australian rider was no match for Kittel.

Phinney finished safely in the lead group – maintaining a 15 second gap over his teammate Steven Cummings to claim the top spot on the podium. Lasse Norman Hansen rounded things off in the general classification in third place.

“For sure I’m relieved,” Phinney spoke at the stage finish. “Every day I felt like it was my race to lose, so every day I felt relieved. Having a great team around me gave me a lot of confidence these days. After performing well yesterday, I knew that today, barring disaster, that we would be coming here with the overall win. I’m super happy, super relieved and I know that the boys are really happy. I’m just glad that we can celebrate as a team.”

Phinney said that he felt strong coming into this year’s inaugural tour.

“I always had my personal soigneur with me. I invested a lot into this year, I knew that it would be an important year. So, I’m super happy with this season and getting results straight away and restoring my team’s belief in me. It’s been great.”

Today’s stage saw the BMC team maintaining much of the control over the race – as they focussed on keeping their leader safely up front.

Early on, Francisco Mancebo, Pier Paolo de Negri and Jay McCarthy succeeded in forming a breakaway group. However, with 55 kilometers remaining, their gap was quickly reduced to just 44 seconds. But, for a brief while, the trio managed to hold-off the inevitable – pushing their lead back up to just over a minute – before eventually being caught with 13 kilometers to go.

Once the break was caught, Giant-Shimano, Omega Pharma-QuickStep, Cannondale and Lampre-Merida and BMC began moving their sprinters to the front of the peloton. And, with the pace being so high in the final kilometers – any attempts toward an attack were nullified.

Peter Sagan was nowhere to be found in today’s finish, as the Slovak rider was seen overshooting a corner during the final 5 kilometers – forcing him from his bike. Frustrated, he threw his bike away – while he waited for a replacement.

With Sagan out of the picture, Cannondale switched their focus to Daniele Ratto, who finished the stage in sixth place.