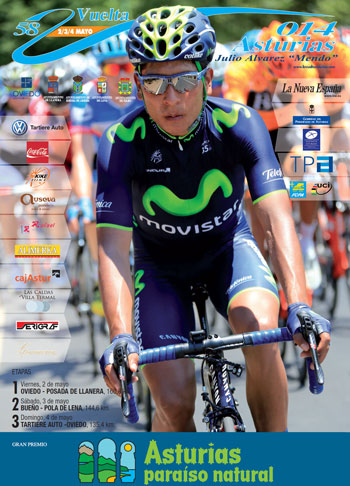 According to race officials, this year’s 58th edition of the Vuelta a Asturias has been cancelled due to sudden financial problems that overcame the race’s organization, Club Ciclista Aramo, this week.

The Asturian newspaper, Nueva España, reported today, that supporters of the race "had committed to hand a sum of money, but haven’t confirmed it yet", putting the race at risk.

Another Asturian newspaper, El Comercio, published today that Club Ciclista Aramo was short of 40,000 euro as a result of sponsors who pulled out as of this week.

Featured on the official race poster, Nairo Quitana cast doubts on whether or not he would be participating this year’s race – after making public comments to the effect that he might instead be racing in the Tour de Romandie.

The decision to cancel the 2014 Vuelta a Asturias was taken this afternoon, after a long meeting, wherein members of Club Ciclista Aramo unsuccessfully tried to contact the Asturian supporters who allegedly withdrew their support this week.

This cancellation represents a significant loss for Spanish cycling, which has lost 67 of the 96 European UCI Tour race days over the last seven years.