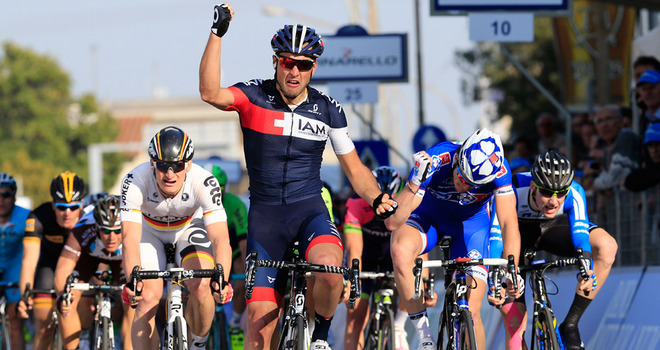 Mark Cavendish will stay in the leader’s jersey, meanwhile Matteo Pelucchi of IAM Cycling, won the second stage of the 49th Tirreno-Adriatico in Italy today.

British champion Mark Cavendish was in the leader’s blue jersey as the 174 riders set off across Italy for the second stage for this UCI World Tour race, which traveled 166 kilometers from San Vincenzo to Cascina.

With the hilly terrain dealt with, the riders moved on to flatter roads for what was expected to be a bunch sprint finish, following two laps of a 20 kilometer  finishing circuit around Cascina, the gap was just under four minutes with 80 kilometers to go.

Dowsett took the first sprint with 52 kilometers remaining before the five started on the first of two finishing circuits with a lead of 3:30.

The second sprint came with 31 kilometers to go, and away rode Alex Dowsett to claim the three seconds in view of the Upezzingh’s Tower at Cappona ahead of Malacarne and Canola who goes into the third stage wearing the King Of The Mountains jersey.

Dowsett went into time trial mode with a lead of 16 seconds over the chasing group and 2:50 over the peloton and was the virtual race leader as the race went over the Arno River.

The chasers were swept up with 16.2 kilometers to go, as Dowsett extended his lead to 44 seconds.

There was a crash with 13.2 kilometers to go with Sky riders, Astana, Netapp and Lotto riders crashing with some going into a ditch.

Out went the orders and the Essex hailing Dowsett was hunted down with his lead down to 17 seconds going into the final ten kilometers.

Dowsett was caught after a valiant effort with 6.2 kilometers to go and the teams started to move their sprinters to the fore.

Alberto Contador was on the front as Mark Cavendish moved up behind the FDJ team and Garmin Sharp.

There was a crash involving Marcel Kittel of Giant Shimano with less than 2.5 kilometers  to go. Lampre took over on the front with Cavendish in fifteenth inside the final kilometer.

AG2R attacked but Lampre came back. Anraud Demare went against Irishman Sam Bennett, Peter Sagan and Andrei Greipel, however, it was Matteo Pelucchi of IAM Cycling who won today’s stage after 3:56:12 of with an average speed of 42.147km/h, ahead of Demare, André Greipel and Sam Bennett of Net App Endura, followed by Sagan, Appollonio, Fortin, Modolo, Hurel and Sbaragli.

Cavendish finished 17th and keeps his leader’s jersey for another day.