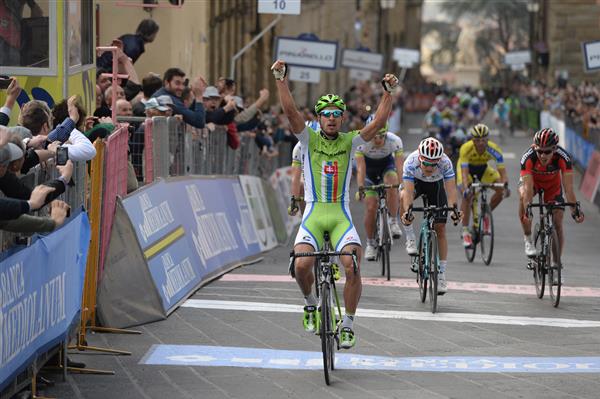 Peter Sagan raised his arms in delight as he conquered a tricky uphill climb to win stage 3 of the 2014 Tirreno-Adriatico today, marking his second victory of the season.

Andre Greipel (Lotto Belisol) was the best of the ‘pure’ sprinters, and the only one to finish in the front group that cleared the last 900 meters, which featured a gradients upwards of 11%,  at the end of an undulating 210 kilometer stage that began in Cascina. Unfortunately, neither former race leader Mark Cavendish or  Marcel Kittel were able to contend the sprint today.

The quartet subsequently built up a lead of more than six minutes over the field, before Thurau decided to attack his companions and head out on his own for the remaining 30 kilometers.

However, after just 6 kilometers of being out in front, the German rider stat up as he acknowledged the looming peloton behind him.

Meanwhile, Greipel’s Lotto Belisol, along with Omega Pharma team continued to lead the peloton at the front. BMC and Tinkoff-Saxo also took turns as well; especially BMC who was hoping to move their man Philippe Gilbert up into place for the the finale.

Following the results of today’s stage, Kwiatkowski is well positioned in the overall GC ahead of his teammate Rigoberto Uran. In the meantime, Team Sky’s Richie Porte, along with Cadel Evans (BMC) and Alberto Contador (Tinkoff-Saxo) will need to make up precious time over the weekend if they wish to stay in contention.