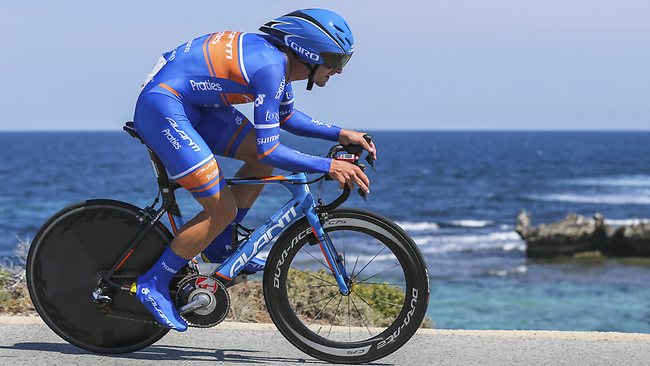 In 2013, Cooper rode himself into the yellow leaders jersey in the same fashion, before going on to take out the overall Tour, earning him the 2013 Subaru National Road Series lead.

The reigning Oceania time trial champion clinched the race against the clock in 24 minutes and nine seconds, 46 seconds ahead of fellow kiwi Michael Vink (Budget Forklifts, 24:55.37), while teammate Mitchell Lovelock-Fay (25:17.12) rounded out the podium, one minute and eight seconds in arrears.

“I was pretty confident that I had won the stage," said Cooper. "But while you’re waiting you’re never sure if you can catch the GC leaders and one after the other they kept finishing and I was still in the lead, my heart was racing as much then as it was when I was racing.”

Cooper, who began the day one minute and seven seconds behind race leader Tim Roe (Budget Forklifts), now leads the Tour by four seconds to Roe and 30 seconds to Lovelock-Fay with one stage remaining.

“After yesterday I was pretty disappointed with allowing that much of a time gap to the leaders. I wanted to give myself the best chance today and wanted to still be a threat.

“Even I think how much time I made up today is pretty crazy,” remarked Cooper.

Cooper sat in the hot seat for most of the race, having set out on the 20 kilometer ride well before Roe, who was last to test his legs and managed to slot into fourth place (25:20.81).

The Tour concludes Saturday, March 29 with a road race at Perry Lakes.

“We definitely want a bunch sprint for tomorrow, there are no time bonus’ on offer so my job is pretty easy. I cant let anyone get away.

"The Avanti team are rock solid.”