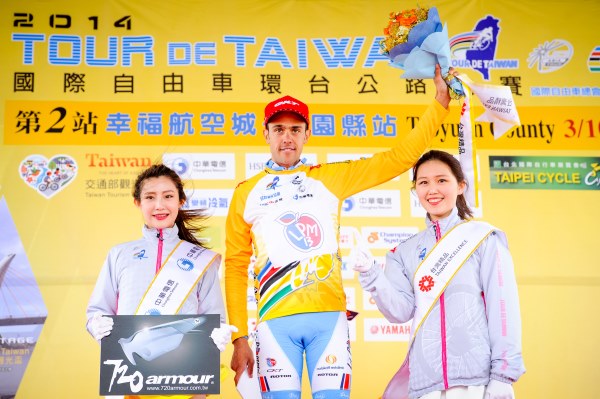 Rémy Di Gregorio won this year’s 26th edition of the Tour de Taiwan, while Fabian Schnaidt out-sprinted his teammate Benjamin Giraud in a close finish to claim the last stage of the Tour in Dapeng Bay today.

A photo-finish was required to determine the winner, as Giraud was ultimately denied a second victory after loosing stage 2 as well.

“This is incredible”, former Champion System rider Schnaidt reacted. “I wasn’t too happy before the stage because of all the bruises I have to deal with since my crash on stage 1. I was already close to winning in Taipei but I got stopped by this crash. However, I like Asian racing because it’s contested on wide roads unlike in Europe.”

In addition to the Tour de Taiwan being Di Gregorio’s first race in Asia, and was also the French rider’s first 2.1 level race victory of his career.

“In 2011, I won a stage at Paris-Nice,” he recalled of his time with Astana. “In 2012, I won a difficult stage of the Vuelta Asturias atop the Alto del Naranco. In 2013, I won the Tour of Bulgaria. So I keep winning. Personally I had my sights set on the Criterium International but for La Pomme Marseille, it was important to come here and win. With one stage win and the overall classification, we’re delighted. I’m pleased to repay the team for the trust they have in me.”

“My team-mates have done a hard work today”, Di Gregorio continued. “The composition of the breakaway suited us but tactically, it wasn’t easy to control as the gaps were tight and the time bonus was crucial. In the final sprint, Benjamin couldn’t take the time bonus. It’s a bit strange to win a mostly flat race because of the time bonus I scored myself in the first two stages. I’m a climber. I want to express myself in the hilly races. The Tour de Taiwan isn’t the ideal preparation for the Criterium International. Now I’ll have to recover from the traveling and the jet lag but I’m very happy to go home with the yellow jersey.”

Dapeng Bay is the biggest lagoon on the southwest coastline of Taiwan. The water area is about 3,500 meters long from east to west, and around 1,800 meters wide from south to north, making a total area of 532 square hectares. The average depth is about two to six meters. There used to be a large-sized oyster bed in the Donggang area. The seafood resources are very abundant. Tourists can take a cruising trip on a yacht to Oyster Shell Island in the bay, and personally experience oyster planting scenes from the past. The oyster plants have now been dismantled due to a decrease in production, and due to their affecting the quality of water. This was also a result of the development of tourism. This area is going to be one of the best places for aquatic activities in southern Taiwan.

Dapeng Bay is home to Taiwan’s most southerly mangroves. The mangrove watercourse is on the southernmost boundary of the mangrove area. This species is known as "avicennia marina vierh." Its aerial root phenomenon is very striking, because it grows in the juncture of the water’s mouth. These Avicenna marina vierh trees are over 70 years old. They grow densely, providing animal habitats and a beautiful growing environment. They make an extremely abundant natural ecological landscape.