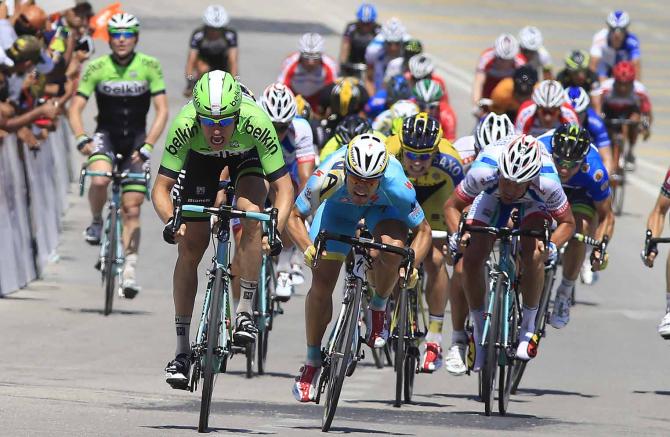 Belkin’s Theo Bos has proven to be unstoppable in this year’s Tour of Langkawi. Indeed, the Dutch rider beat Andrea Guardini and Aidis Kroupis in a sprint finish to claim his fourth stage victory in this year’s race.

Today’s stage ended with another bunch sprint after 111.1 kilometers of racing from Bandar Permaisuri to Kuala Terengganukm. However, earlier in the race, Yonnatha Monsalve and Carlos Quintero managed to ride clear of the field. And, from there, the duo quickly built up a gap of almost four minutes over the peloton, as they tried in earnest to wrest the leader’s jersey from Mirsamad Pourseyedigolakhour. In fact, at one point, Quintero had become the virtual leader of the race. However, in the remaining 25 kilometers, both riders were caught by the chase.

The final 2 kilometers of the race were animated by a crash involving numerous riders. However, it caused little to disrupt the overall classification, and the main contenders for the sprint.

"The final sprint was a bit difficult for me today, because it was a little bit disrupted and then I found myself on my own, but I was behind Kroupis and started the sprint there. I managed to overtake him for the win."

"It feels great already, it has been a very good race for us this time. We will see how it goes, maybe if the chance comes, we can still go for another win tomorrow," said Bos.

After winning stages 2, 7 and 8, today’s win brought Bos’ tally of Tour of Langkawi wins to six.

Pourseyedigolakhour managed to defend his overall lead, and looks poised for victory as the race heads into the final stage tomorrow.

Stage 10 will cover 103.1 kilometers from Tasik Kenyir to Kuala Terengganu, finishing with a three lap circuit around Dataran Shahbandar.