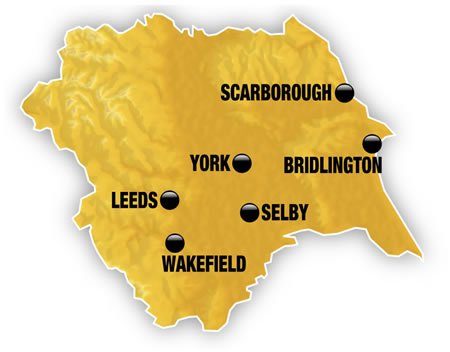 The route for the 2015 Tour de Yorkshire was announced today. announced.

The inaugural three-day race will commence on May 1 in Bridlington, East Yorkshire, and will travel around Yorkshire to Scarborough, Selby, Wakefield and York, before ending the final day in West Yorkshire at Roundhay Park, Leeds.

The new race, is being organized by Welcome to Yorkshire and Amaury Sport Organization, which also organizes the Tour de France.

Stage one is to start in the seaside town of Bridlington and finish further up the coast in Scarborough, North Yorkshire.

During the day the riders will take in Flamborough Head and the North York Moors National Park, through Dalby Forest towards Pickering and back to the coast at Whitby. It will then head south to Robin Hood’s Bay with the finish line on the seafront at Scarborough.

Stage two on Saturday 2 May sees the race start outside Selby Abbey, North Yorkshire and finish in York.

The route takes in much of the Yorkshire Wolds, and takes the peloton towards Market Weighton, through North Newbald and on to Beverley. It will turn north to Malton, then on to Stamford Bridge before a circuit of York.

The final day on Sunday 3 May starts in Wakefield, West Yorkshire and finishes in Leeds.

Riders will travel through South Yorkshire to Barnsley before heading to Holmfirth and Ripponden, before riding the Cragg Vale descent – raced in the other direction on the Tour De France.

The riders will go through Hebden Bridge, Oxenhope and the cobbled streets of Haworth. After a steep climb at Goose Eye the riders visit Ilkley, with a climb up by the Cow and Calf rocks before Arthington and the finish line in Roundhay Park.

The race is also to include a women’s race on the second day and a mass-participation "sportive". Here there will be several distances where people can ride the same route as the professionals. This will be held on 3 May.

The event is approved by cycling’s governing body the UCI.

The three-day race was announced in September and hopes to build on the success of the Tour de France when an estimated three million people watched the Grand Départ over two days in Yorkshire, which resulted in a huge economic boost to the region.

“After the grandest of Grand Départs of the Tour deFrance, we were keen to return to Yorkshire. With its stunning landscapes, iconic cities and tough climbs, Yorkshire offers all the ingredients needed for a great cycling race. The welcome we received in Yorkshire in July 2014 was simply spectacular and I am very much looking forward to returning there in May for the Tour de Yorkshire,” said Tour de France director Christian Prudhomme.

Gary Verity, Chief Executive of Welcome to Yorkshire added: “Before the Grand Départ had even finished people all across Yorkshire were asking when we can have more cycling. The Tour de Yorkshire will bring back many of the world’s top cycling teams and there will be an opportunity for ordinary people to ride the same roads on the same day in the sportive. And this is a free event to watch so there is an opportunity for everyone in the county to be part of Tour de Yorkshire in one way or another.”