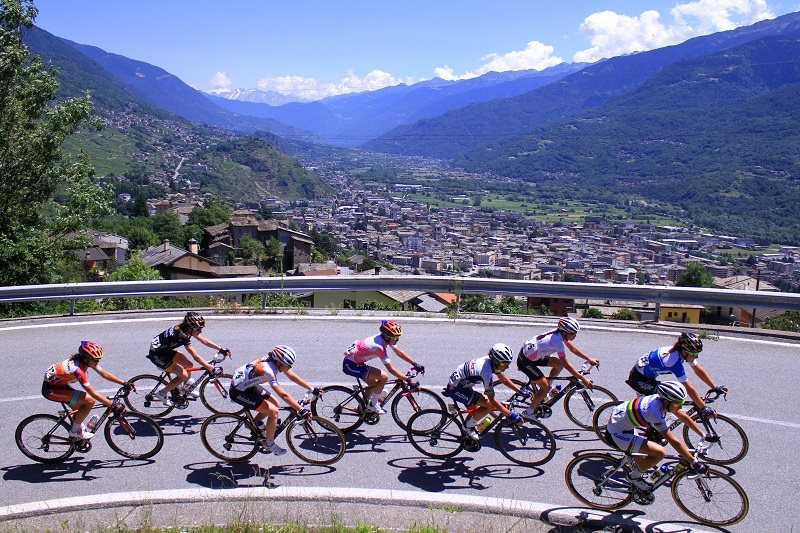 Details of the 27th edition of the Giro d’Italia Internazionale Femminile (Giro Rosa), were presented at the Colnago factory in Cambiago, Italy today, outlining the nine-day stage race, which will include the challenging climb of the Mortirolo, along with 21 kilometer individual time trial, followed by a final mountain stage to the Sanctuary of Madonna della Guardia in Alassio on the Ligurian coast.

Several top female riders were in attendance for today ceremony, including Elisa Longo Borghini, who won the blue Jersey in the 2014 and 2015 races, as well as Japanese national champion, Mayuko Hagiwara, Barbara Guarischi and Italian national champion Elena Cecchini.

“We all want to win every stage,” Elisa Longo Borghini said enthusiastically. “It will for sure be a hard Giro and as well, we’ll be thinking about the general classification.”

The Italian riders will also be fighting for selection for the Rio Olympic road race squad as well.

“I’m happy because there is a beautiful stage at in my home town,” Cecchini said of the race. “I training on these roads and I’d love to win it, the goal is to conquer a place for the Olympic Games. We have a strong team and we will see which roles we will have.”

As the main sponsor of the race, Colnago, will have its name appear on this year’s maglia rosa.

In a statement, the patriarch of the legendary brand, Ernesto Colnago, said, “I was one of the first people to support women’s cycling and I’ve learnt there isn’t men’s cycling or women’s cycling but just cycling.” “Women are great riders and I only needed a handshake with the Giro Rosa organiser Giuseppe Rivolta to confirm my support.”

The 27th edition of the Giro d’Italia Femminile is mainly a northern affair, starting in the northeast near Treviso on July 1 and ending in Verbania, close to Switzerland, north on Milan on July 10.

The race – also known as the Giro Rosa, begins with a prologue in the evening in Gaiarine, near Treviso. The first stage, with finish in San Fior di Sotto, will be held In the same area before heading to the Friuli region to remember the victims of the earthquake of 40 years ago. The sprinters will fight for the win after the flat stage to Lendinara but will be tested by the Colli Euganei hills before finishing close to the Po river.

The Central part of the race will take place in Lombardy, first with the Tour of the Iseo Lake – from Costa Volpino to Lovere, then via the high mountain stage from Grosio to Tirano with the terrible Mortirolo as Cima Coppi – the highest climb in the race.

A transfer to Liguria is rewarded with a final mountain stage and a tough uphill finish at the Sanctuary of Madonna della Guardia in Alassio and a hard 21.9km individual time trial to Varazze. The last opportunity for the sprinters is in Legnano on Saturday, July 9, on the same route of the men’s Coppa Bernocchi, before the final day to Verbania, where the overall winner and other jersey winners will be decided.