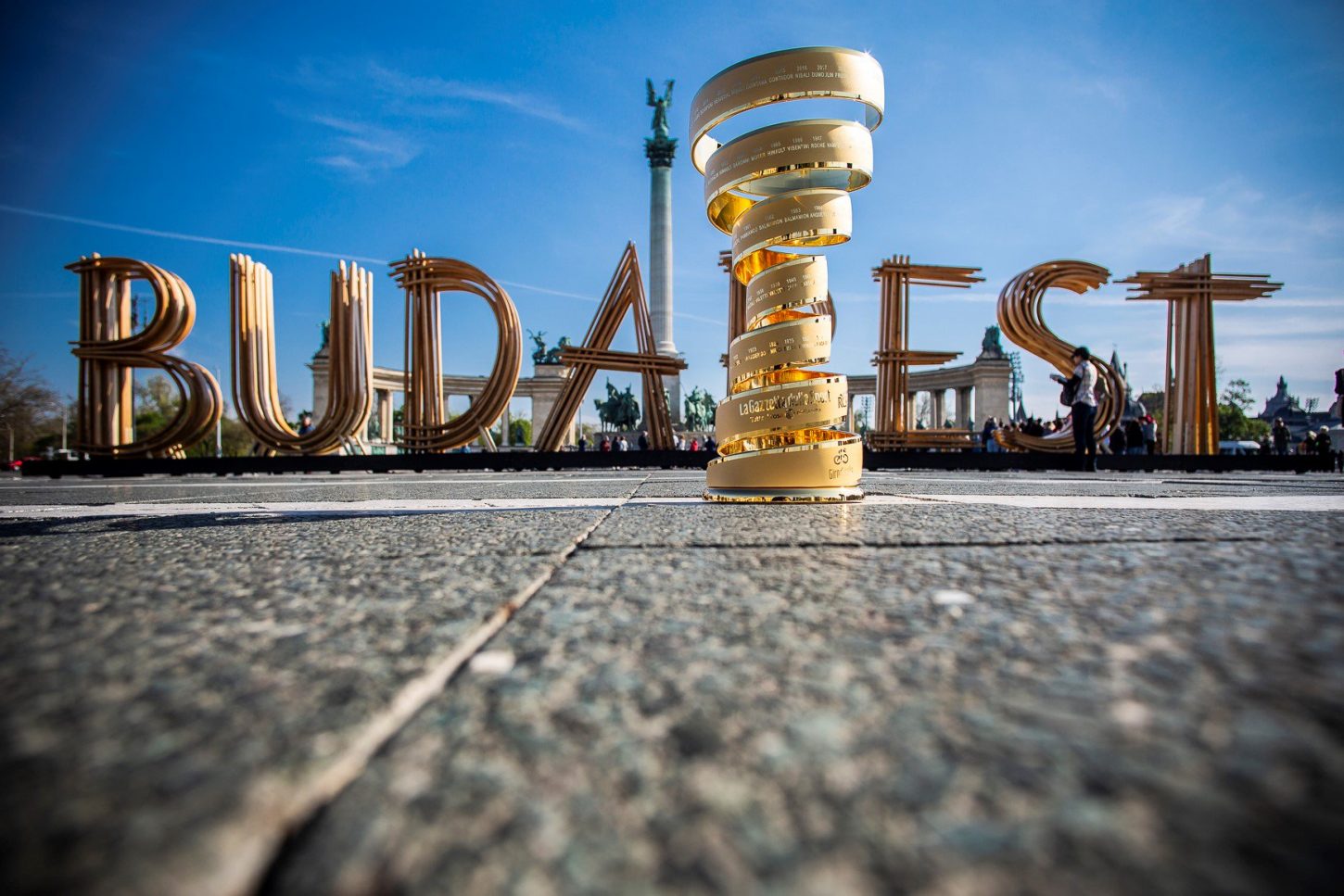 Next year will mark the 14th time that the Grande Partenza has been staged outside of Italy, and the first time a Grand Tour has visited the Hungarian capital.

The most recent visit abroad saw the race leave Europe for Jerusalem, Israel last year. Other recent foreign starts have also included Belfast, Northern Ireland and Apeldoorn in the Netherlands.

Details of the routes have yet to be confirmed although it is expected the race will begin on the Friday allowing riders, staff and journalists the chance to travel from Hungary back to Italy on the Monday, the race’s first rest day.

Budapest to Trieste, Italy’s most northeastern city, will be a 550km drive for the race convoy and primary reason for the race’s extra race day although much shorter than the race’s transfer last year when the entire convoy of support vehicles had to journey from Eilat, Israel to Catania on the island of Sicily.

Following the race’s 2020 trip to Budapest, the Giro d’Italia will return for a home start in 2021 with the island of Sicily already having been confirmed as host.

First stage from Budapest and two more on the Magyar territory. This will be the 14th Grande Partenza outside of Italy for the Corsa Rosa.

Hungary will host the Grande Partenza of Giro d’Italia 2020. This afternoon in Budapest, at the Italian Cultural Institute, the Grande Partenza was officially announced in the presence of the Government Commissary for Active Hungary, Máriusz Révész; the Deputy Mayor of Budapest, Alexandra Szalay-Bobrovniczky; the Minister of Sport, Tünde Szabó; the Minister of Foreign Affairs, Tamás Menczer; the RCS Sport CEO, Paolo Bellino and the Giro d’Italia Director, Mauro Vegni.

The start will take place in the capital, Budapest, and will be the prelude to two further stages on Hungarian soil. Details of the course will be unveiled in a dedicated press conference to be held in coming months.

Giro d’Italia Director, Mauro Vegni: “Making our announcement here today in Budapest, this Grande Partenza from Hungary is going to be really special. It will be the fourteenth time that the Giro d’Italia has started outside Italy and the first time it will start from this part of Europe. There will be three stages on Hungarian soil: the first will start from the capital and we will reveal the routes of the other stages soon. I am sure that Hungary will welcome the Corsa Rosa in the best possible way and that the Giro d’Italia, as it always does, will embrace the whole nation with its passion.”

RCS Sport CEO, Paolo Bellino: “It is very satisfying to have reached this agreement with Hungary, a nation that loves sport and will certainly appreciate the Giro d’Italia. We are delighted to be working with all the Hungarian institutions a year in advance of the Grande Partenza. Their insights will enable them to develop a project that brings out the excellence of both Hungary and the Giro.”

Government Commissary for Active Hungary, Máriusz Révész: “Today a dream has come true, one that no one dared hope for. Having an event of international importance such as the Giro d’Italia, which will start from Budapest, is a source of great pride for our country. The Giro is not only a sporting event but also a great promotion for the territory.”

Deputy Mayor of Budapest, Alexandra Szalay-Bobrovniczky: “We are really proud of our city’s role in organizing the Grande Partenza of the Giro d’Italia. Budapest has already demonstrated its ability to organize top-level sporting events but the Giro is something special. 2020 will be a year full of sport for us and we want Budapest to become the capital of sport.”

Minister of Sport, Tünde Szabó: “This world-famous event, coming to Hungary for the first time, will, I am sure, attract thousands of tourists and fans. The Giro is a media event that will enable our country to work on a long-term project. Ours is a nation of sport lovers and we want cycling, which we have been developing in recent years, to become an integral part of it.”

Minister of Foreign Affairs, Tamás Menczer: “Sport is a space for meeting and belonging for everyone. We strongly wanted this Giro and today we were able to announce it. We want to show all our country’s values, as well as the historical and cultural beauties that Hungary has to offer. Thanks to worldwide televisual connectivity we will be able to show our Hungary, the place we would like people to come and visit. We are all involved as institutions and we are aiming for this project to be defined as the best Grande Partenza of the Giro d’Italia ever.”