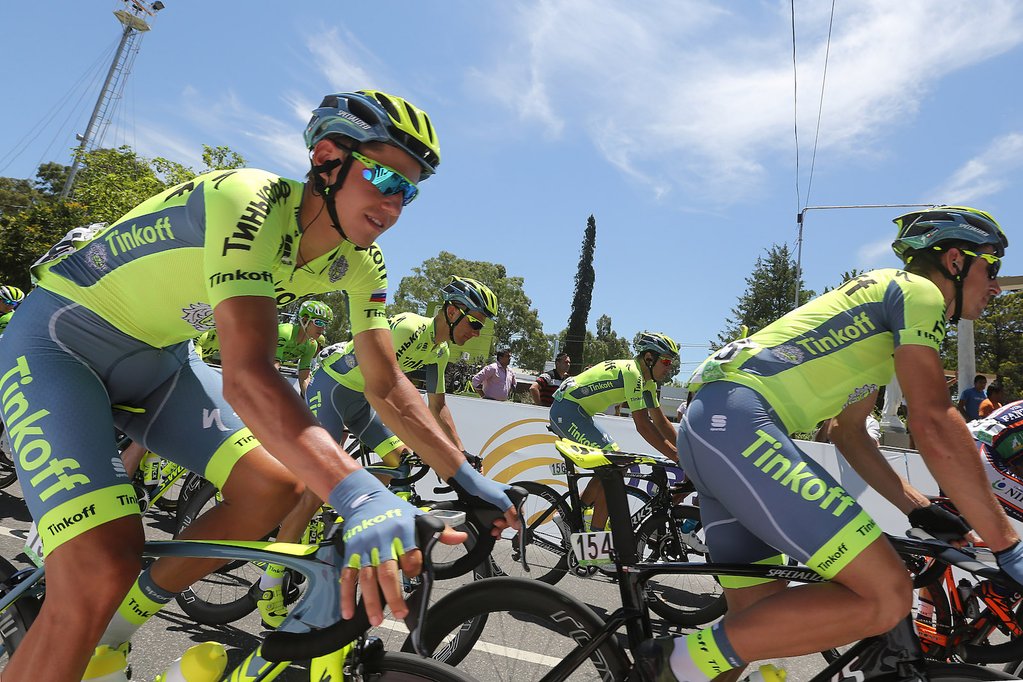 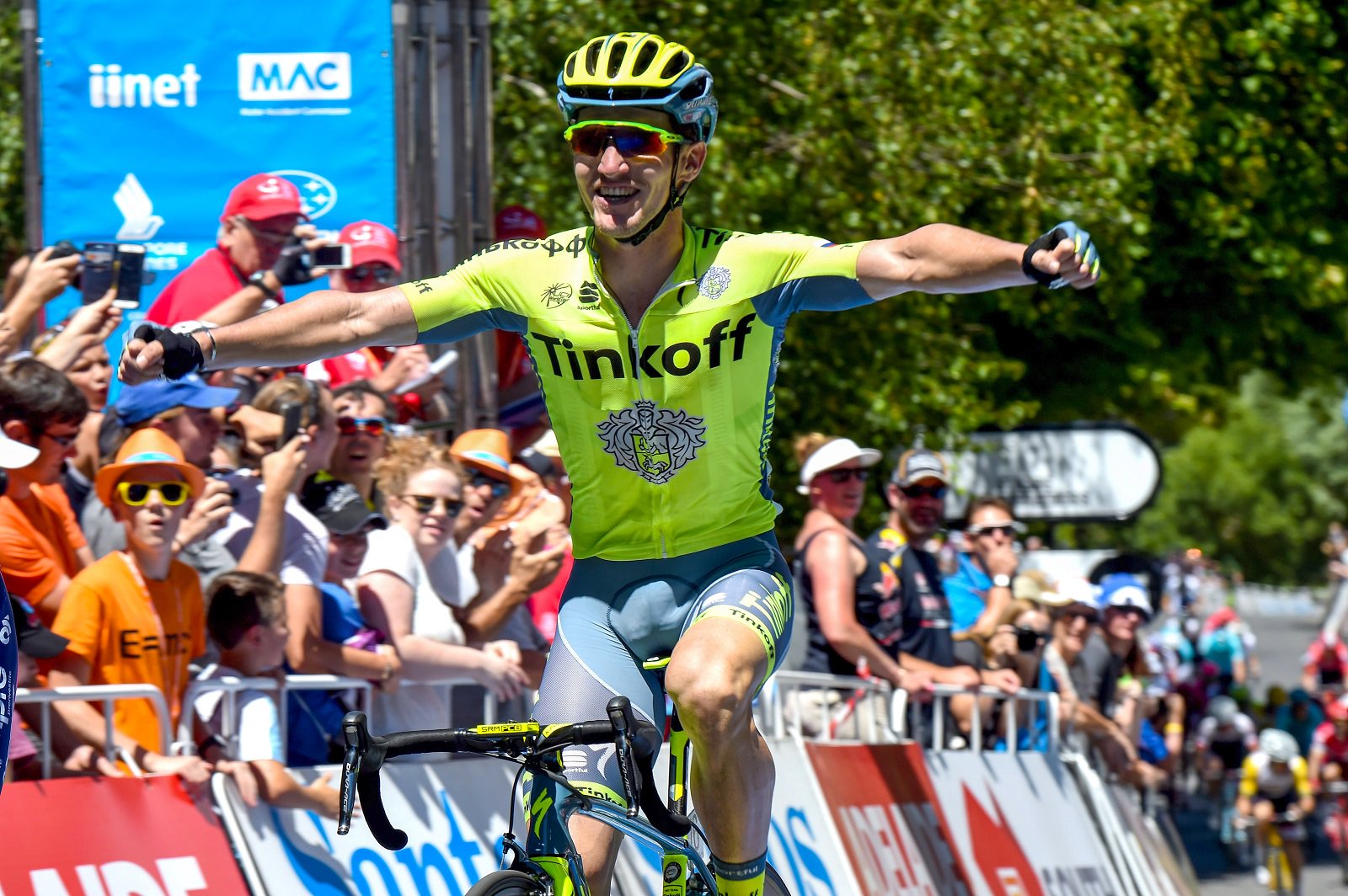 Australian Jay McCarthy has taken over the Santos Ochre Leader’s Jersey of the Santos Tour Down Under after winning the Staging Connections Stage 2 at Stirling.

The 132 kilometer stage travelled from the cosmopolitan Adelaide suburb of Unley through the picturesque Adelaide Hills. The riders covered the 21 kilometer Stirling loop five times providing superb viewing for the 110 thousand fans who flocked to the local area.

The final battle for the line was a hectic affair marred by a crash just inside the final kilometer when eight riders hit the deck and most of the peloton was caught up behind them but under the rules they were all awarded the same time as the winner because the crash happened in the final three kilometers.

While some of the pre-race favourites missed the chance to claim a time bonus on the line, McCarthy’s Tinkoff team mates steered a course for him through the tangle so he could deliver the victory and grab the ten second stage winner’s bonus.

He edged out Diego Ulissi (Lapre Merida), who won this stage in 2014, by half a wheel with defending Santos Tour Down Under champion, Rohan Dennis (BMC Racing) also avoiding the crash to ride home in third place.

“I’ve done this stage for a few years now so we certainly had a plan,” said McCarthy who was fifth in the road race at the recent Australian Championships. “This year coming into this race I was in very good shape and before the start today I was hoping to be given a chance.

“The team supported me fully and I’m also given a chance to go for GC (overall) this week as well,” he said. “It’s great to come out and get the victory today but the week is not finished (and) I hope to recover for Corkscrew (climb) tomorrow.

“There’s a lot of work ahead of us but I hope to keep getting more results,” said McCarthy.

“The plan was to stay out of trouble and be up there in the front, and if there was an opportunity for the sprint, go for it,” said Dennis. “I was one of the first to get around the crash, but if that crash didn’t happen, I don’t think I would have been third.

“I hope the crash doesn’t hinder (Simon) Gerrans, because no one wants to win like that,” said Dennis who is keen to claim back-to-back crowns.

Gerrans’ day was panning out perfectly until the crash. His Orica GreenEdge team mates had set him up to grab time bonuses in both iiNet intermediate sprints and they were ready to guide him to the line.

“It’s disappointing because we were right where we needed to be to have a good finish,” said Gerrans, a three time winner of the event. “It’s a shame to lose time bonuses, because a second counts for a lot in this race.

“Two of the times that I won they’ve come down to placings,” said Gerrans who despite bad luck was looking on the bright side. “All was not lost, because I don’t think I stuck my nose out into the wind more than a few minutes all day. The team did a great job protecting me.”

“It’s a great win for Jay,” said Yates. “We knew he was in good shape…and we worked for him today.

“It’s his first WorldTour win, so it’s a big day for him,” said Yates. “We now have the lead, and we are not just going to say, OK, we’ve won a stage, we’re happy. We know that BMC and Orica are the teams here racing for the victory, and we can try to use that to our advantage.

“It’s always good to get that first win of the season under the belt, so to have it come on the second day of racing, everyone’s happy.”

The riders set off in hot, humid conditions and the pace was on from the start because the only categorised climb of the day in the Subaru King of the Mountain competition was only 14 kilometres down the road.

Over the top at Carey Gully Italian Manuele Boaro (Tinkoff) claimed the 10 points ahead of Pat Lane (UniSA-Australia) with Lotto Soudal’s Thomas De Gendt and FDJ’s Yoann Offredo picking up the remaining points.

That win gave Boaro the lead in the Subaru King of the Mountain competition, because overnight leader Sean Lake, with whom he is tied on points, finished more than three minutes behind Boaro on today’s stage.

“Since I’m on good form and we’re here to ride at the front, I tried the KOM (King of the Mountain) because it was only ten kilometres after the start,” said Boaro. “The whole day has gone well. We knew from the Australian national championships that Jay (McCarthy) was in a great shape.

“He’s our leader and we’ll back him with the aim of winning the Tour Down Under.”

Heathfield was the location of the two iiNet intermediate sprints of the day and the first, at the 30 kilometer mark, went to Tour contender Simon Gerrans (Orica-GreenEdge) with team mate and overnight leader Caleb Ewan on his wheel ahead of Reinhardt Janse Van Rensburg (Dimension Data) in third place.

Soon after the iiNet sprint Lotto-Soudal’s Adam Hansen launched an attack that no-one countered and the Australian was soon more than two minutes clear. A puncture as Hansen headed into Stirling for the second time disrupted his rhythm but he stayed clear to claim the second iiNet sprint at the 49 kilometre mark.

Back in the bunch Orica-GreenEdge upped the speed to ensure Gerrans collected the second place time bonus at Heathfield. That, along with his bonus from winning the first iiNet sprint shaved five seconds off his overall race time. Ewan again crossed behind him to bring his bonus total for the day to three seconds.

But for him the points were more important and whilst the 21 year old would end the day more than six minutes down and ranked 114th overall, he retained his lead in the iiNet Sprint classification.

The burst of speed from Orica-GreenEdge in the lead up to the sprint brought the gap to Hansen down under a minute but when the peloton settled, the gap extended again, and at the third loop through Stirling, Hansen was back out to a 1min50sec lead.

Over the next 20 kilometers Hansen stayed clear as, initially, Orica GreenEdge and later BMC controlled the pace on the front of the peloton to keep Hansen within catching distance.

But as the finish approached the chase began in earnest and by the bell lap Hansen was less than 40 seconds ahead. He was caught 19 kilometres from home.

“We knew we wanted to race aggressively today and after that first group was caught, I decided to go,” said Hansen. “It’s always complicated when you are one alone against the pack, but it was a good try.”

Drapac’s Brenton Jones was off the pace early in the day but struggled on nonetheless only to be cut from the race for finishing outside the allowed time limit.

The beachside suburb of Glenelg is in the spotlight for the start of tomorrow’s Thomas Foods Stage 3 that will see the 137 riders travel through the Fleurieu Peninsula and the Adelaide Hills.

The riders will tackle the infamous Corkscrew Road climb before a fast descent and tight turn to finish in Campbelltown. 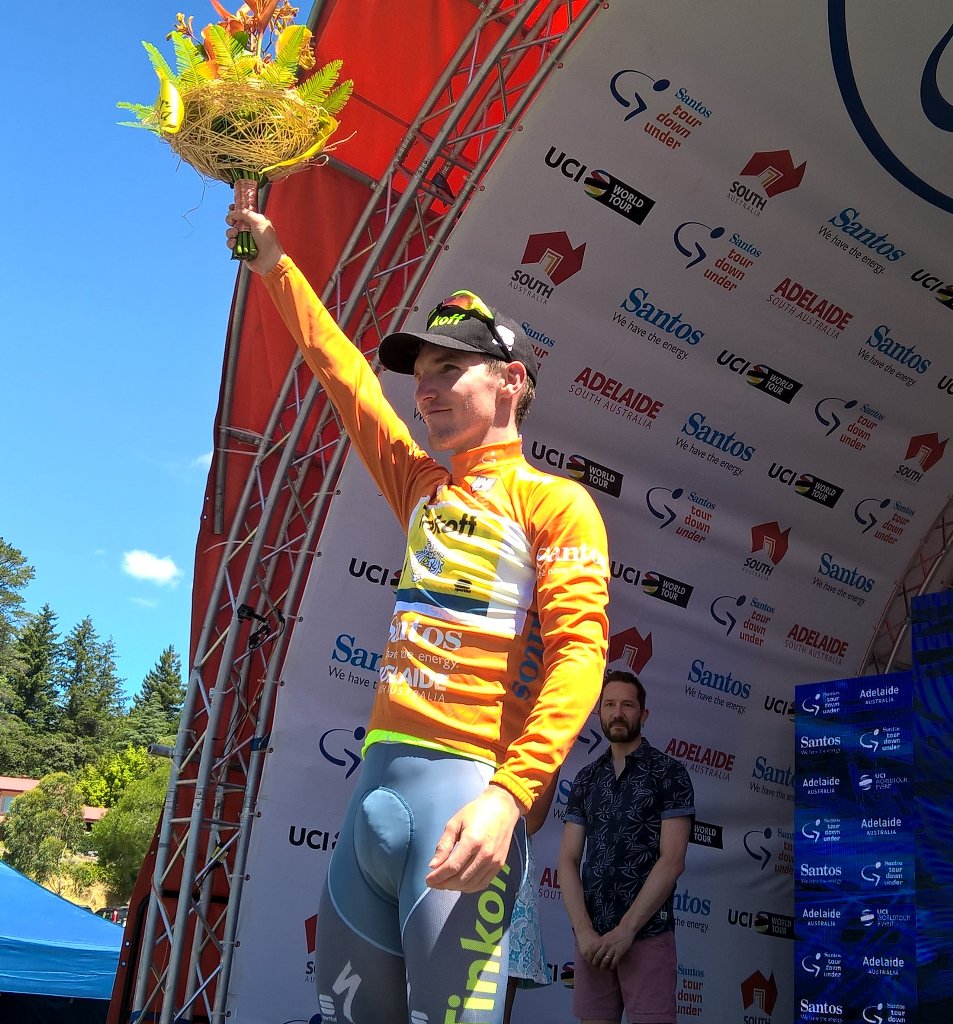