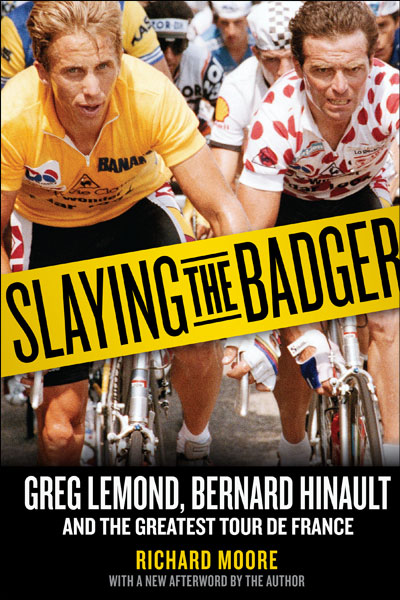 Bernard Hinault is “Le Blaireau,” the Badger. Tough as old boots, he is the old warrior of the French peloton, as revered as he is feared for his ferocious attacks. He has won 5 Tours de France, marking his name into the history books as a member of cycling’s most exclusive club.

The stakes are high. Winning for Hinault means capping his long cycling career by becoming the first man to win the Tour six times. For LeMond, a win will bring America its first Tour de France victory. So why does their rivalry shock the world?

LeMond and Hinault ride for the same team.

Asked by a reporter why he attacked his own teammate, the Badger replies, “Because I felt like it.” and “If he doesn’t buckle, that means he’s a champion and deserves to win the race. I did it for his own good.”

LeMond becomes paranoid, taking other riders’ feed bags in the feed zone and blaming crashes on sabotage. Through it all, with the help of his American teammate Andy Hampsten, LeMond rides like a champion and becomes the first American to win the Tour de France. His win signals the passing of cycling’s last hide-bound generation and the birth of a new breed of riders.

In Slaying the Badger, award-winning author Richard Moore traces each story line to its source through innumerable interviews—not only with LeMond and Hinault in their own homes but also with teammates, rivals, race directors, journalists, sponsors, and promoters.

Told from these many perspectives, the alliances, tirades, and broken promises divulged in Slaying the Badger build to the stunning climax of the 1986 Tour de France. Slaying the Badger is an incomparably detailed and highly revealing tale of cycling’s most extraordinary rivalry.

Before Lance Armstrong, there was Greg LeMond. As the first, and now the only American to win the Tour de France, LeMond looks back at the 1986 Tour during which friend, teammate, and mentor Bernard Hinault—reigning Tour champion and vicious competitor known as “The Badger”—‘promised’ to help LeMond to his first victory. But in a sport that purports teamwork, we see it’s really every man for himself. Hinault has his say, too, along with others involved in the tension, rivalry, physical demand, and (last but not least) the many agendas and politics that make up the Tour. Well-chosen footage complements the candid comments to provide a penetrating look at a sport that never really was innocent.

ABOUT THE DIRECTOR(S)
John Dower’s Greg LeMond film is the latest of several sporting feature documentaries and continues on from Bradley Wiggins: A Year In Yellow, which earned him a BAFTA nomination for Best Director. Other directorial credits include: Once In A Lifetime: The Extraordinary Story of the New York Cosmos (2006) and Thrilla in Manila (2008), which was in competition at the Sundance Film Festival, earned BAFTA and Emmy nominations, and won Grierson and Peabody Awards.