'Bravery on the Bike": Women Cyclists in Afghanistan 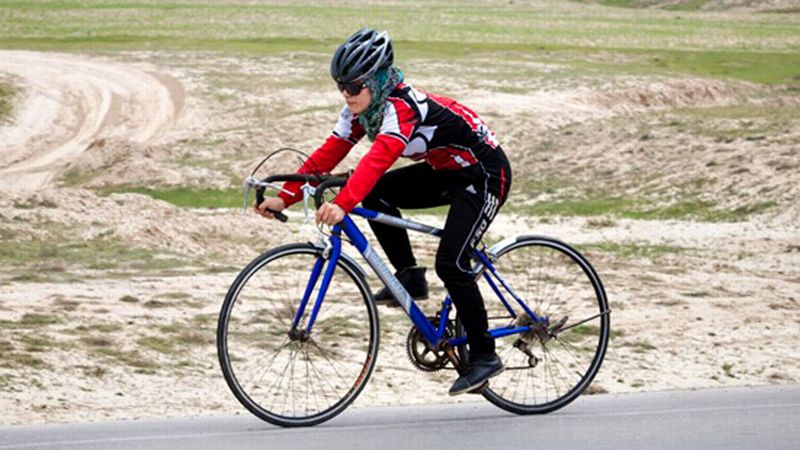 The Afghan National Cycling Federation is the only one of Afghanistan’s 11 bike-racing teams that permits women to train and race.

On a rural stretch of highway north of Kabul, Marjan Sadeqi pumped her legs faster, putting even more distance between her road bike and the pack chasing her. It was only a training ride, but she was feeling strong and giddy at being so far in front. As a 21-year-old woman living in Afghanistan, Sadeqi relished the rare feeling of freedom. Exhilarated, she held on tight, put her head down and pedaled even harder.

Trucks whizzed past, pulling her into their slipstream, then letting her go. Some honked encouragement. She wished the drivers knew that she was a professional athlete. She wished they knew that she was training for the Asian Cycling Championships in New Delhi the next month. Then they would all honk, she thought. Sadeqi imagined that this was what it must feel like to be a man: open, confident, capable. She smiled. On the bike, she was unstoppable.

Then three men on motorbikes pulled up beside her. The man closest to her yelled at her to stop. He shouted that what she was doing was wrong. Smile gone, Sadeqi stared straight ahead. She kept pedaling. "Whore," the man snarled. The others hurled more taunts. Sadeqi held her line. Then one of them rammed her with his motorbike.

Sadeqi remembers being struck, tumbling off her bike and through the air, hitting the ground. Then black. Her teammates saw it all from behind — the outraged men on motorbikes, the collision, the men speeding away. Sadeqi crumpled on the pavement, injured, her bike destroyed.

The Afghan National Cycling Federation is the only one of Afghanistan’s 11 bike-racing teams that permits women to train and race. The team is based in Kabul, the center of Western influence in Afghanistan, and where most of the country’s progressive families live. Outside a handful of neighborhoods in Kabul, there is little tolerance for women on bikes anywhere in Afghanistan. Taliban influence says women are supposed to stay indoors, out of sight, except when absolutely necessary. Cultural taboos say it is obscene for a woman to straddle a saddle, and any woman who does is considered amoral.

"The fact that their families have allowed them to ride bikes makes these women, and their parents, very unique in Afghanistan," says Heather Barr, a researcher in Kabul with Human Rights Watch.

When Marjan Sadeqi was attacked on a training ride in February 2013, the Afghanistan National Cycling Federation wasn’t trying to make a provocative statement about women’s rights. The federation was just trying to let athletes who wanted to ride bikes ride bikes. It started several years ago, when the teenage daughter of coach Abdul Sediq asked her father if she could try cycling.

Coach Sediq didn’t see why not. To him, riding a bike isn’t about morals; it’s about health and wellness and having fun. He started biking in Afghanistan as a kid and was racing before the war with the Soviet Union. He remembers better times, before the Taliban influence rose in response to the Russians. Back then, both male and female athletes pedaled through Afghanistan’s bucolic countryside.

Against the wishes of his wife, who thought it was potentially dangerous and a waste of time, Sediq taught their daughter to ride. She became the first female member of the Afghanistan National Cycling Federation. Word spread through her school, and across neighborhood beauty parlors, where liberal Afghan women gather to share news. Curious female athletes began to approach the coach. They wanted to try biking too.

Sediq developed a careful screening process. After gauging a young woman’s sincerity and athletic aptitude, he meets with her family to explain the training program and requirements. Cyclists are expected to furnish their own bikes and equipment, and commit to twice-weekly training rides. After a two-year period, if they have not shown enough potential, they are released from the program.

"Some parents refuse to let their daughter participate," Sediq says. "But they are still proud that she was chosen — they know that I turn away many more girls than I accept."

Both the girls and their families understand the risks. Because it is dangerous for young women to be out in public without a male escort, Sediq drives a support vehicle during training rides. He saw the attack on Sadeqi from behind the wheel of the sag wagon. He chased down the offender and called the police. "This is the culture of 30 years of war," he says.

"It is the reason why some people don’t want to give women the right to play sports, to ride bikes. The narrow-mindedness, it is fear."

Marjan Sadeqi, called Mariam by her friends and family, woke up in the hospital. A nurse administered glucose and fluids through an IV, and medication for the sharp pain in her lower back. Sadeqi was worried. Not because she had just been brutalized for riding a bike, but because she thought her back was broken and that she would no longer be able to compete in the Asian Cycling Championships.

"I knew my attacker would be put in prison," she says.

"That wasn’t my problem. As a female cyclist in Afghanistan, you have already accepted the risks. What’s important is that you don’t get discouraged, that you don’t stop riding."

Sadeqi’s back wasn’t broken, but it was strained. She was released from the hospital with the doctor’s caution to take it easy for a couple of weeks. Sadeqi dialed back her training, but not her hopes for the race.

The 2013 Asian Cycling Championships were being held in New Delhi in March. The Afghanistan Olympic Committee sponsored Sadeqi and two of her teammates to travel with Coach Sediq. It was their first big race, and the farthest any of them had ever been from home. Sadeqi got a new bike and traveled to India as planned.

The international race scene proved an eye-opener for the Afghan women. They’d raced only locally, against one another, and once in Pakistan. More than 600 professional cyclists from 41 countries converged on New Delhi, accompanied by coaches, soigneurs (trainers) and family members. Journalists and photographers crowded the start and finish lines. Sadeqi and her teammates were starstruck. They quickly noticed that they didn’t fit in. None of the other cyclists from Muslim countries wore hijabs under their helmets. Everyone else’s equipment was top of the line. The other competitors even had special cycling food and drink — gels and bars and flavored water.

Sadeqi tried not to feel intimidated. She registered for the 75-mile women’s elite race. Her younger teammates Selma and Farzana registered for the 50-mile junior women’s road race. Their training rides in Afghanistan had never been more than 30 miles.

On one of the shuttle rides to the race facility, Sadeqi sat with a female competitor from India. The two were able to communicate by speaking Urdu, a second language for both.

"I realized then how much more free the other women were to focus on biking," Sadeqi says.

"They train every day. In Afghanistan, we are lucky to ride twice a week. And when we do ride, we are distracted with thoughts of all the other things we should be doing at home, and what our families must think."

Sadeqi married when she was 15. She grew up in Iran, where her father owns a construction company. She has four sisters and three brothers. Sadeqi has been in Kabul for six years with her husband, who works for the military. Four years ago, a friend at the beauty salon introduced her to Coach Sediq. The friend knew that Sadeqi liked sports; she played volleyball in secondary school, and played tennis with her siblings. Sadeqi had to persuade her husband to let her ride.

It took Sadeqi only minutes to learn to ride a bicycle. Sediq immediately saw her athletic potential. Most cyclists take at least two years to work up to competition level. She took one year and is the strongest female rider on the team.

Key to that success is the fact that she has not yet had any children. Once an Afghan woman has a family, bike racing becomes impossible. Even if her husband would allow it, her community, no matter how progressive, would not. The 10 other women riding for the ANCF are in still in secondary school, and one goes to university. Even these young women are anomalies: The closer a girl gets to her childbearing years, the more her family restricts her personal freedom.

Sediq experienced this reality within his own family. After he taught his daughter to ride, she became an excellent cyclist. She competed in four races and was a local champion. But once the girl went through puberty, Sediq’s wife worried that her daughter’s attention was not in the right place, that she was wasting her time on the bike. The tension was so high that his daughter stopped cycling when she was in the Afghan equivalent of the 10th grade.

On race day in New Dehli, Sadeqi woke up in a shabby hotel room with Selma and Farzana. The two younger women had raced the previous day, and neither had been able to finish the 50-mile course. The other riders went out at a pace too fast for Selma and Farzana, who exhausted themselves trying to keep up and dropped out.

Sadeqi didn’t do much better. Due to her injury, her fitness level wasn’t where it needed to be. And she didn’t fully understand the importance of drafting, or consuming energy food and drink on long rides. Shaking and gasping for air, Sedeqi stopped and got off her bike long before the finish line — a DNF in her first, and perhaps only, major international race.

The coach wasn’t concerned with his team’s performance.

"They are the first women to ever ride for Afghanistan," Sediq says. "The point is not how they did, but that they were there."

Sadeqi says, "I was proud just to be part of it." But that doesn’t mean she is satisfied. Sadeqi and the team have resolved to work harder to compete at the international level.

With an eye on the 34th Asian Cycling Championships in Kazakhstan in May, the team is putting more resources into developing women’s bike racing in Afghanistan. They aim to spread their message that it’s fun and healthy for women to ride bikes — even in areas outside the capital. They plan to expand the team beyond Kabul, and eventually hold women’s races in Afghanistan. In the meantime, they’ll compete more often in Pakistan, including races April 5-7.

To that effect, Sediq has partnered with an American cyclist, Shannon Galpin, and her nonprofit Mountain2Mountain, which works to improve women’s lives in regions of conflict. Galpin secured carbon-fiber road-race bikes and some used cycling equipment for the team. Galpin is also recruiting American and European women’s coaches to come to Kabul to teach training techniques, bike-handling skills, nutrition and race tactics.

Galpin’s agenda is women’s empowerment. "The women’s team may not think of themselves as flying an activist flag for Afghan women," Galpin says, "but the very nature of what they’re doing — riding a bike — is revolutionary."