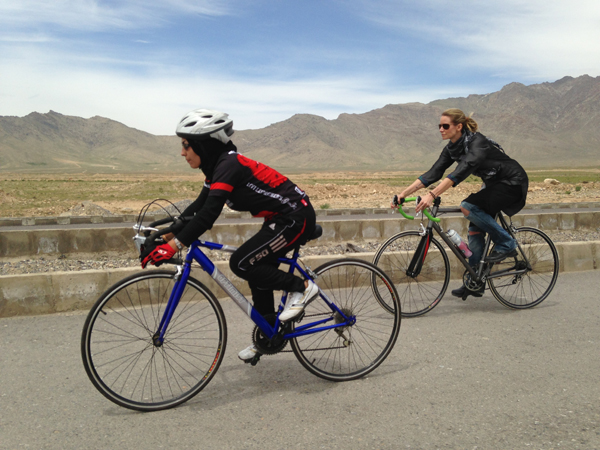 There have been several articles written over the last few months that have brought Shannon Galopin’s Afghanistan Women’s Cycling Project to life, as she continues her crusade (and that’s surely the best word to describe it) to bring social justice to a country that has been notoriously unjust; especially when it comes to women. But, instead of a bunch of political gibe or titillating talk about peace, love and diversity, Galopin is getting her message across using bikes.

​We take you to her most recent story regarding the acquisition of more than 50 new bikes that were graciously donated by Liv/Giant as part of her two-wheeled revolution.

No Bike Left Behind

Today 53 racing and mountain bikes showed up in a semi truck.  Thanks to the ongoing endless winter in the mountains of Colorado that meant the driver wouldn’t come down the hill to  my apartment and hilarious one-woman convoy in my Element ensued – 4 bike boxes at a time into my landlord’s garage.  Its only a temporary holding space, in two days they fly with me to Kabul, Afghanistan.

Thanks to the incredible generosity of our partner Liv/giant – we have bikes, gear, clothing, tires, and helmets.  Along with an insane amount of donated cycling gear that has been accumulating in my home, this gear drive makes the last one look like a cake walk.  United has confirmed they will allow me show up at the passenger drop off with a 60 plus boxes, but they will not waive the extra baggage fees. We need to crowdsource the funding to get these delivered with us to Afghanistan so we can show the world that progress is still ongoing in Afghanistan, that women are breaking gender barriers amidst the turmoil of the elections, and we can pedal a revolution together! Several years ago when I first started looking at the controversy of women and girls riding bikes this was the only image you would see of women on bikes.

I would ride in various areas of the country and ask about the possibility of Afghan women riding.  The answer was always, ‘no’.  Cylcing is just not acceptable for women, and according to Human Rights Watch researcher, Heather Barr, its one step above the morality crimes that women are jailed for.  More women drive than ride bikes in Afghanistan. Its THAT controversial.

But these women are THAT brave.  Today, because of Coach Seddiq and a handful of courageous young women, you have women riding as part of the Afghan National Cycling Team, representing their country in races in Pakistan, India, and with your help – in the upcoming Asia Cycling Championships in Astana, Kazakhstan.

I go back on Monday to deliver the bikes, gear, clothing with the goal of not just continuing to support the national team, but to start the first ever women’s mountain bike team and make plans for a future women’s bike race with the cycling federation.  This is truly a team effort and we need your help to support the team. You can donate any amount, big or small to –www.mountain2mountain.org/donation and you’ll be part of this two wheeled revolution!

Thank you and please, donate, spread the word, share this blog, and together we can show the world what women are capable of!