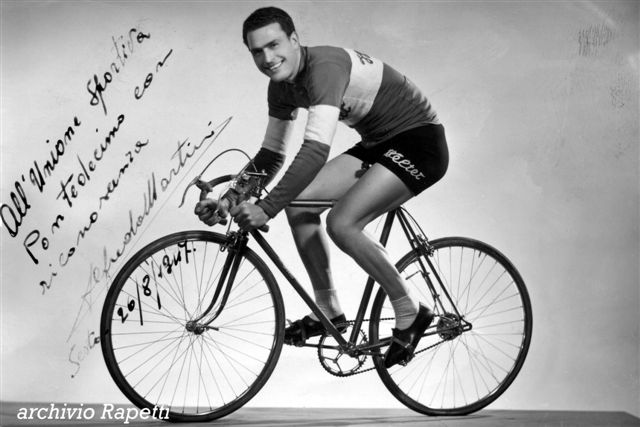 Happy birthday to Italian cycling icon, Alfredo Martini, who was born on this day in 1921.

Martini’s professional cycling career spanned some seventeen years from 1941 to 1957. The Italian rider is best remembered for wining the Giro dell’Appennino in 1947, the Giro del Piemonte in 1950, and a stage of the Giro d’Italia in 1950; he wore the pink jersey for one day and finished third behind Koblet and Bartali. He also won a stage in the Tour de Suisse of 1951, finishing third behind Kubler and Koblet.

Martini is also remembered for his finish in the legendary Cuneo-Pinerolo route raced on the 17th stage of the 32nd Giro d’Italia on 10 June, 1949: a truly memorable moment in Giro history. Then, the first time the route was raced, the route comprised five major climbs in a row through the Italo-French mountain passes: Colle della Maddalena (Col de Larche in French), Vars, Izoard, re-entry into Italy via Monginevro and, finally, Sestrière before arriving in Pinerolo. Two hundred and fifty kilometers, much of which on dirt roads as they were then.

“Campionissimo” Fausto Coppi’s performance is legendary, his 190-kilometer solo ride beginning halfway up the Colle della Maddalena and concluding at the finishing line in Pinerolo. He won by 11 minutes and 52 seconds from his historic friend and rival Gino Bartali in second, with Alfredo Martini third – but first among the “mere mortals” – at 20 minutes 40 seconds.

Later, Martini became the C.T (Commissario Tecnico) of the Italian national team from 1975 to 1997. Under his leadership Italy won World Championships with Francesco Moser in 1977 in San Cristóbal (Venezuela); with Giuseppe Saronni in 1982 in Goodwood (Great Britan); with Moreno Argentin in 1986 in Colorado Springs (USA): with Maurizio Fondriest in 1988 in Renaix (Belgium); and with Gianni Bugno in 1991 in Stuttgart (Germany) and again with Bugno in 1992 in Benidorm (Spain).

Since 1998 he has been the Honorary President of the Federazione Ciclistica Italiana.