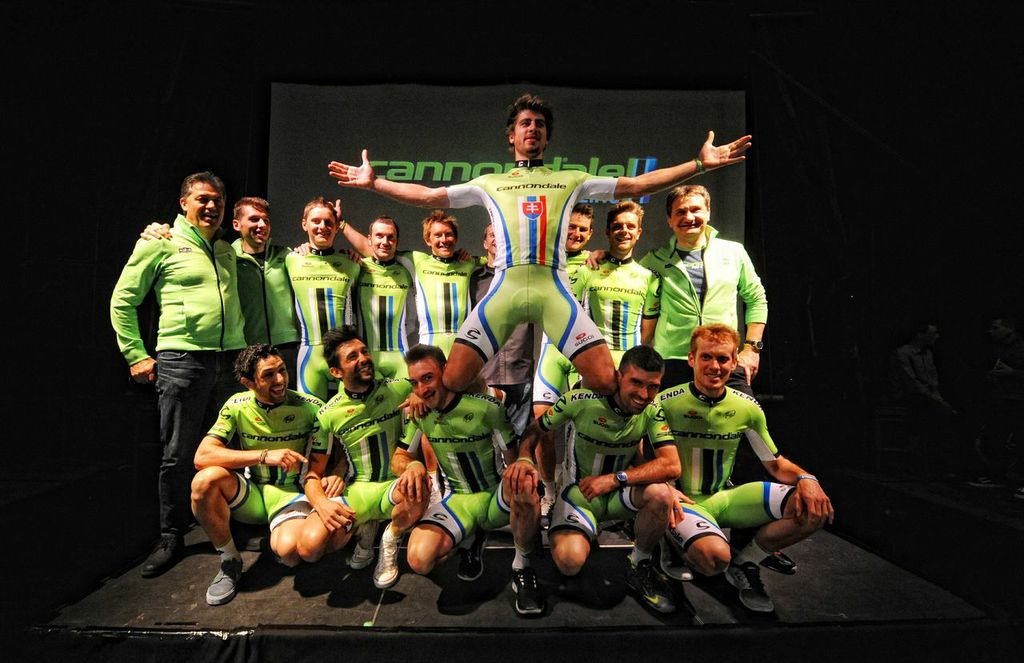 Some highlights from Cannondale’s 2014 Team Presentation in Los Angeles.

Cannondale presented the 2014 team last night at the Canyon Club outside Los Angeles, California. During the night of revelry, that included major music performances and plenty of surprises for those in attendance, the team captains Peter Sagan, Ivan Basso, Elia Viviani, Moreno Moser, Damiano Caruso and the entire 2014 squad were officially introduced to an adoring crowd at the Cannondale Pro Cycling event followed by guests mixing and mingling with the team throughout the evening.

During the team presentation, attendees were given an exclusive look back at the amazing 2013 season and a sneak peek of what the upcoming 2014 season will bring.  After the presentation, guests rocked the night away to an epic concert by The Green Machine, a special Cannondale band made up of rock legends Curt Schneider on bass (Five For Fighting and Richie Sambora), Jared Shavelson on drums (BoySetsFirst and Purelove), Michael Ward on guitar (Gobol Bordello and The Wallflowers), John Rubano on the vocals (Jim Belushi and The Blues Brothers) and Matt Rollings on the keyboard (Fiona Appleand Richie Sambora).

Highlights of the event included a surprise musical performance by rider Moreno Moser who showed the crowd that his musical chops might just rival his skill on a bike when he popped up on stage to perform "Molly’s Lips" by Nirvana with The Green Machine. Also getting in on the action was Cannondale General Manager, Bob Burbank, who rocked the stage with the band for his rendition of the Bon Jovi classic song "It’s My Life."

This year, to bring our fans closer to the excitement, Cannondale Pro Cycling partnered with select SoCal Cannondale dealers offering consumers the chance to win a Golden Ticket to the team presentation and launch party. The 50 winners each were able to bring a guest and meet their favorite riders live and in-person to share in the excitement of the team presentation.

The 2014 team promises fans an incredible year of racing coming off of the team’s successful inaugural season. The official roster will continue to develop a stable group of young, talented international riders with a flair for winning and world-class camaraderie. The "Green Machine" team boasts 28 riders including four recent signings, four neo-professional riders, and twenty returning riders from the 2013 squad.

The 2014 team presentation is part of a four-day team camp in Los Angeles, CA. The members of the Cannondale Pro Cycling team in attendance are training on and around the local roads of Thousand Oaks, preparing for the rapidly approaching start of the 2014 season.

"With the combination of the ‘best bikes in the world’ and the awesome talent of our Cannondale Pro Cycling team, we’re looking forward to an unforgettable 2014 season," said Rider Ted King. "Kicking off the season with a sweet launch party event wasn’t half bad either."

On the road, the Cannondale Pro Cycling season starts in just one week with riders heading to the Tour Down Under and the Tour de San Luis.

Holy top tube length. The average rider would have to take a taxi in order the reach the handlebars on Sagan’s bike !