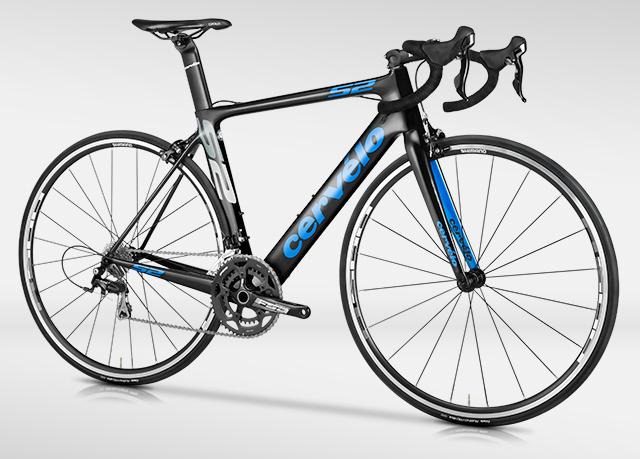 As seen at this year’s EuroBike and InterBike shows, Cervélo has revamped it’s entry-level "aero" road bike – the S2 – with an all new frame and fork.

Initially, the S2 began it’s career as the Solist. Cervélo decided to increase the original design’s potential, and aim toward a much more aerodynamic and solid performer. This was accomplished by reducing a considerable amount frontal surface area on the frame, along the addition of a tapered head tube – which Cervélo claims increases stiffness by a mighty 32%.

In addition, extra stiffness has been added in the area of the bottom bracket by the use of Cervélo’s own BBRight bottom bracket, wherein a 30mm diameter spindle and press-fit 30 bearings are utilized. The significance of this, is that on the non-driveside the bearing is pushed outwards by 11mm. This in turn means that a wider shell can be used – which means that the down tube and seat tube and chainstays can be oversized. Cervélo claims that this has results in an increased stiffness by 20% over the old S2.

Additionally,the seat tube now incorporates a cutaway section so it curves around the rear wheel – for improved airflow. Also, there’s a squared off section of the down tube that’s been designed to not only accommodate a water bottle – but it acts as a  “continuation of the airfoil to smooth airflow and minimise aero drag”. This technology is also used on the company’s new S3.,

Other changes include the adaptation of an internal seat clamp replacing the previous external design, along with the use of "skinny" seatstays borrowed from the RCA – added compliance. There’s also clearance for 25mm tires.

The cable routing is still internal, but they’ve moved the entry port from the top tube to the down tube, which makes for a much clearer look. Cervélo calls the cable routing ‘future proof’ so we can assume that means it’s fully compatible with all mechanical and electronic groupsets and braking systems.

Cervélo will be offering a frameset, along with a Shimano 105 build option.