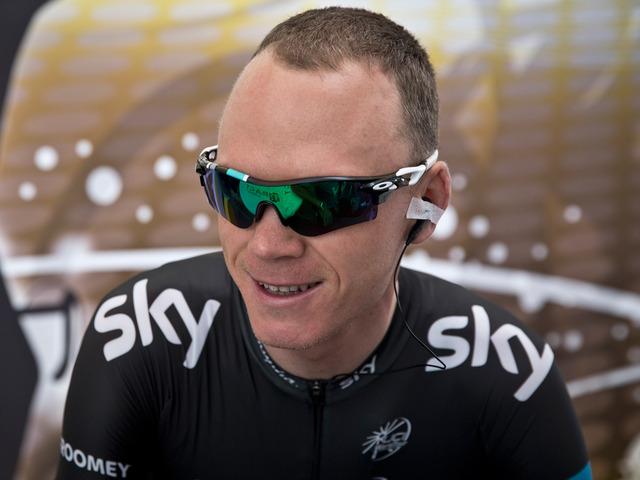 Chris Froome has been exercising the art of "flip – flopping" over the last several weeks, as to whether or not he’ll ride in next year’s Tour de France, to the extent one might begin to wonder if he’s entertaining the thought of entering politics. 😆

​The British rider has been dithering for weeks now, over his commitment to ride in the 2015 Tour – at times suggesting that he might skip the French Grand Tour, and instead focus on the Giro d’Italia and Vuelta a Espana.

However, the British rider indulged all who have been waiting in angst for a final decision, with a statement on his team’s website today – that  he’s decided to target another Tour de France win after all.

Chris Froome is back in training in his native South Africa and has revealed the Tour de France will be his main target for 2015.

Froome took a well-earned rest after his season-ending appearance at the Saitama Criterium and used his downtime to get married and embark on a honeymoon before his thoughts turned back to his back.

Fully refreshed and invigorated, the 29 year old is now enjoying some warm weather training and will jet over to Tasmania this week to take part in the Stan Siejka Launceston Cycling Classic alongside Richie Porte.

December also sees Froome’s race calendar begin to take shape, and his gradual step up in training will ensure he hits the ground running in 2015.

He said: “I’ve enjoyed my time off, and now I am concentrating on preparing myself mentally and physically for the season ahead.

“I’ve started training in the warm weather in South Africa where I have been able to get some decent miles in on the bike.”

Froome looks set to return to competitive action at the Ruta del Sol in February, with his season being carefully crafted to ensure he arrives at the Tour de France in peak condition.

“Of course, together with the team, we’ve had to prioritise some events over others, but the Tour will remain my main focus for 2015,” Froome added.

“The concept of doing all three Grand Tours in a season has got appeal but having said that, I know how hard it is to do two Grand Tours while targeting the overall win. At this point in my career I feel that the Tour takes priority. There may come a time at some point down the line where other races may take preference, but for 2015, it’s the Tour.

“There is no doubt that this Tour de France is going to be a tough test, but I enjoy the challenge and there’s no reason why I would be any worse off than any of the other contenders. It is our responsibility as a team to adapt accordingly so that we can be as competitive as possible there.

“It’s a climbers’ Tour next year so I’m going to have to work extra hard in the mountains and spend less time on practicing time trialling. It’s also going to be important to be as light as possible, so our nutrition will play a key role.

“There will be new tests for me as an individual, that’s what I’m looking forward to.”