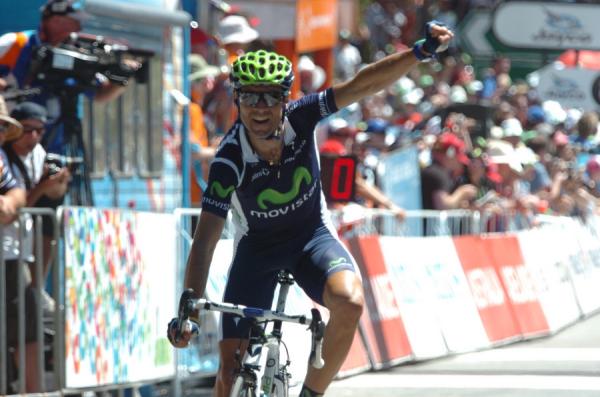 Alejandro Valverde (Movistar) claimed this year’s Clásica San Sebastián, with a solo victory after 219 kilometers of racing through the Basque Country.

The Spanish rider made his move on the final climb – subsequently  distancing his breakaway companions along the descent – during the remaining 4 kilometers.

Amets Txurruka (Caja Rural) succeeded with an early breakaway effort, that later earned him a six-minute lead over the peloton.

However, as the race reached the 70 kilometer mark, his advantage had dwindled to just two minutes. And, a further 10 kilometers later, he was reeled in by the ensuing peloton.

With 34 kilometers remaining, the escapees were holding to a slight lead of less than half a minute over the chase.

However, as the race tackled the climb of the Alto de Arkale, the breakaway group was complete;y swept up by the peloton.

Andriy Grivko (Astana) was the next rider to try his luck – taking a 16 second lead over the chase – with 24 kilometers remaining.

As the race approached the final climb of the day, the Bordako Tontorra, Team Movistar came to the fore, along with Katusha.

Grivko’s lead came to an end as the race entered into the final 14 kilometers.

From there, Ag2r set the pace heading into the Tontorra. However, Katusha’s Alexander set about an attack of his own, quickly opening a substantial gap. In turn, Orica-GreenEdge’s Adam Yates responded with a vigorous pursuit, followed by Mikel Nieve (Sky), Mollema (Belkin) and De Marchi.

Nieve was the first rider the reach Kolobnev on the narrow ascent, only to be passed by Rodriguez with Valverde in tow over the summit.

With 6 kilometers remaining, Rodriguez and Valverde we’re holding onto a slight lead over Mollema, Nieve and Yates.

Yates was the first rider to make contact with the lead duo, only to be join by the others – to form a five-man group off the front.

With 4 kilometers to go, Valverde surged from the group, with Yates crashed out from behind him.

As Valverde hit the final kilometer, he was still holding onto a 12  second lead over the pursuit. And, with no signs of fading, he was able to hold-off his rivals to the finish.