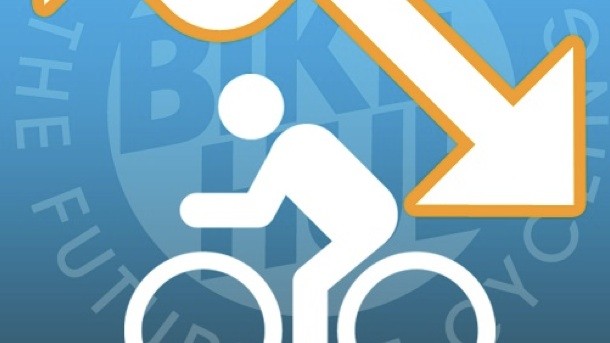 The Bike Hub smartphone app is a journey planner and bike shop finder. It has the world’s first bicycle route specific sat/nav functionality.

Cyclists could navigate with the TomTom app or any of the other multiple satnav apps available for smartphones, but none of these can guide users via bike shortcuts and cycle paths, because none of these satnav apps use the bike-specific routing engine from Cyclestreets.

Bike Hub – available for the iPhone and Android phones – has a 3D satnav function, with either a male or female voice to announce directions. Prior to turns, and when right upon them, the iPhone also vibrates, a feature not on any other satnav app or standalone satnav.

A user can attach an iPhone to handlebars and use the app with full-on 3D map mode with all the usual satnav info, or the iPhone can be hidden away in a pocket with voice guidance and vibration alerts only. In busy traffic, the voice is just about audible inside a pocket but use of one ear-bud would solve this problem.

The app was created to steer cyclists away from busy traffic. When on quiet cycle paths, the voice and vibration alerts work from within a pocket.

The voices on the app say street names out loud so you know exactly where you are when you’re riding along.

The bike shop locating tool works from the smartphone’s location-aware GPS and can find shops within a six mile radious, or via the search function.

The Bike Hub app – which is free, thanks to the Bike Hub levy – is available now on the iTunes app store and in the Android Marketplace.

The free Bike Hub cycling satnav app for iPhonesand Androids finds quickest or quietest cycle routes in UK and Ireland. It also locates nearest bike shops in UK. It has been featured on Treehugger.com, Macworld.co.uk, The Register, BikeRadar.com, Road.cc, The Sunday Times, and BBC.co.uk.

The cycle routing – note: UK and Eire only – is done via CycleStreets.net. This A to B bicycle journey planning website uses mathematical graph theory algorithms to quickly work out great bike routes. It uses OpenCycleMap, a cycle-specific map based on the community-generated OpenStreetMap.

The Bike Hub app can cache maps so users can download sections of the map to their phones for even faster screen loads. There’s also an exclusive feature: A to A routing via ‘sticky’ points of interest, such as pubs or churches. This makes the app into a leisure route suggester.

The app also has an online version on this site.

The following video runs through the app’s main features and how to use them:

Here are some of the latest reviews of the app on iTunes. We really appreciate these reviews and the star ratings. As there’s no mechanism to reply to reviews on iTunes it’s impossible to provide solutions to those people who report problems, and leave one star reviews.

A common complaint is that the app thinks the user is in the North Pole! This is easily fixed by allowing the app to know a user’s whereabouts in ‘location settings’ on the iPhone. When the app is first opened after downloading a pop-up message asks for the user to allow the app to know the user’s location. Some people click ‘no’ and wonder why they can’t see polar bears… And to that reviewer who said he/she has tried to open three accounts but still can’t log in, we’re flummoxed: there’s no account creation option on the app.

If the app is eating your battery by staying on even when you think you’ve turned off the app, get the 2.01 update, this fixes the issue. When the app says you’re too far away from the route suggested that’s because you have strayed from the route, or taken a wrong turning by mistake. At the moment the app doesn’t offer dynamic re-routing: this is a feature in the next version of the app.

Android users have issues specific to certain Android phones. Android is an operating system that’s available on lots of different devices: we haven’t been able to test the app on every single Android smartphone. The app works fine on all the market-leading, ‘standard’ Android phones but there are some niche ones which may have screen sizes that aren’t well suited to the app.

And to those folks asking whether we’ll bringing out a Blackberry version the answer is no. The platform isn’t suited to third-party mapping apps.

And there are no plans to extend the routing overseas. A common complaint is wonky routing. We suspect these reviews are left by people outside of the UK. The app description in iTunes stresses that the app routing only works in the UK and Ireland, but we get a surprising number of downloads from the US, Japan, South Korea and a long list of other nations. Users not in the UK or Ireland can use the bike shop finder (as this is fed by the bike shop layer of OpenStreetMap) and will see maps, but the routing-engine is only able to plot routes in UK and Ireland.

The Bike Hub iPhone app is available – for free, thanks the Bike Hub levy – on iTunes and in the Android marketplace.