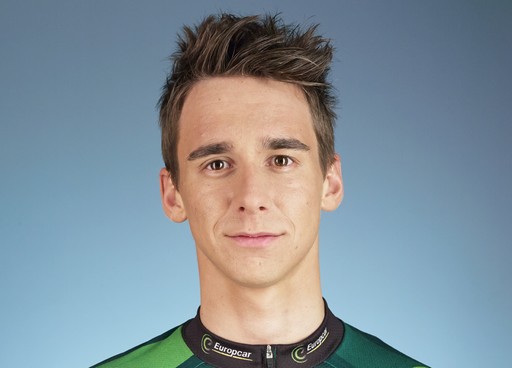 Bryan Coquard (Europcar) claimed stage 3 of this year’s Etoile de Besseges, in a dramatic sprint finale, after the peloton caught the day’s breakaway group – one  kilometer from the finish.

In the final moments of today’s stage, Coquard succeeded in holding off a challenge from Giacomo Nizzolo (Trek) and Edward Theuns (Topsport Vlaanderen) to seize the win.

As result of his second place finish, Theuns moved up into the overall race lead.

Yesterday’s cold temperature and high wind, gave way to  warmer, less windy conditions, as riders faced the hilliest stage in this year’s race – tackling three passages of the Col des Treslys in the first part of the route.

The first breakaway group got underway with Boris Dron (Wanty), Johnny Hoogerland (Roompot) and Walter Pedraza, attempting to ride clear. However, the trio were quickly reeled back in by the peloton, only to see a subsequent group of escapees containing Maxime Monfort (Lotto Soudal), Kenneth Vanbilsen (Cofidis), Serge Dewortelaer (Veranclassic), Frederik Backaert (Wanty Group Gobert), Walter Pedraza (Team Columbia), emerge. But, just as their predecessors, they too were eventually caught – one kilometer from the top of the first climb.

However, as the race tackled the Col des Brousses, Vuillermoz succeeded in riding clear, while building up a slight gap of 25 seconds over the peloton. The French rider was quickly joined by Evaldas Siskevicius (Marseille) – to form a lead duo.

Meanwhile, back in the peloton, Dron and Marek Rutkiewicz (CCC) joined forces in an attempt to track down the two escapees. And, once they reached the 131 kilometer mark, both groups had merged.

Unfortunately, their efforts didn’t pay-off, as all four riders were caught just one kilometer further up the road.

From there, several attacks occurred within the ranks of peloton, with no one managing to get clear. In the meantime, Theuns (Topsport Vlaanderen) picked up important bonus seconds, after beating fellow GC contenders Cyril Gautier (Europcar) and Tony Gallopin (Lotto Soudal) in the first intermediate sprint.

Engoulvent, Castiblanco and Kreder were the first riders to get dropped from the breakaway group. And, at the top of the climb, the remaining escapees were almost caught as well.  However, Feillu managed to hold off Loubet in the battle for maximum points, with Planckaert, Veuchelen and Davide Rebellin (CCC) being the next three riders across the line.

On the descent, Planckaert attacked again, and while the rest of the attackers were caught, he succeeded in creating a slight gap of 18 seconds at the bottom of the Col des Brousses.

However, they were quickly brought back into the fold, while  Planckaert continued to stay out front with a 20-second lead.

From there, Rolland, Backaert and Yoann Paillot (Team Marseille 13-KTM), were the next to try their luck – eventually  bridging themselves to Planckaert.

Fabricio Ferrari (Caja Rural) later made it across too, followed by Flavien Dassonville (Auber 93).

Back in the peloton, things began to slow, thus allowing the six escapees to build up a substantial gap of 2:30 – with 76 kilometers remaining.

When the gap increase to 2:50, the peloton began to up its pace. And, as they reached the climb of the Col de Treslys for the final time, the gap had come down to 2:35.

At one point, Paillot suffer a puncture, but still managed to rejoin the breakaway group.

Meanwhile, Dewortelear decided to take off in pursuit, and by the time he reached the top of the climb, he had reduced the break’s advantage to 1.55. But, the peloton still remained  2:55 behind.

However, on the descent, the peloton succeeded in both reeling in Dewortelaer, and reducing the gap to 2.00. And, a further 10 kilometers up the road, peloton had reduced the gap to 1:30.

As the race headed into the final 3 laps of the 6.6 kilometer finishing circuit, the advantage was still 1:25. As a result, this prompted Bretagne to contribute to the chase, with Brice Feillu trading turns at the front with the Lotto Soudal and Trek. Still, at the end of the first lap, the escapees continued to hold better than a minute over the chase.

With 10 kilometers remaining, the gap was now at 55 seconds – and steadily falling. And, with 7 kilometers to go, the gap had fallen to 35 seconds. Another 2 kilometers later, it was at just 22 seconds.

With 1200 meters remaining, the peloton really came to bear down on the escapees. And, inside the final kilometer, they were caught.

Coquard clearly benefited from the work, as he seized the stage win in a  hotly contested sprint finale.