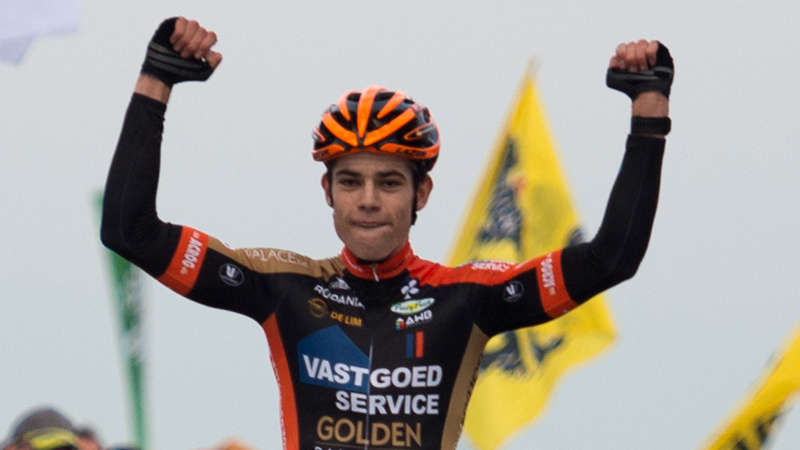 Van Aert made his way to the front from the outset of today’s race. And, from there, the Belgian rider remained at the front for the duration.

Van Aert’s teammate, Jens Adams, took up the task of setting a furious pace early on, which left riders like Sven Nys (Crelan-AA Drink) struggling to stay onboard.

However, Adams was later reeled back in – only to see Philipp Walsleben (BKCP) try his luck – subsequently building up a slight lead of 7 seconds over the chase – as the race headed into the final lap.

From there, Van Aert and Van der Poel chased in earnest. But, as the lead trio tackled a slight rise just before the finish, Van der Poel seemed to be distancing his rivals, as both Van Aert and Walsleben briefly slowed.

But, just as Van der Poel seemed to have clinched the victory, Van Aert unleashed a final acceleration, that took him past the BKCP-Powerplus rider to seize the win.

Meanwhile, series leader, Sven Nys, finished in fourth at eight seconds back. However, he still continues to lead the Bpost Bank Trofee series, while Kevin Pauwels (Sunweb-Napoleon Games), who came in fifth today, remains in second, with teammate Klaas Vantornout in third.