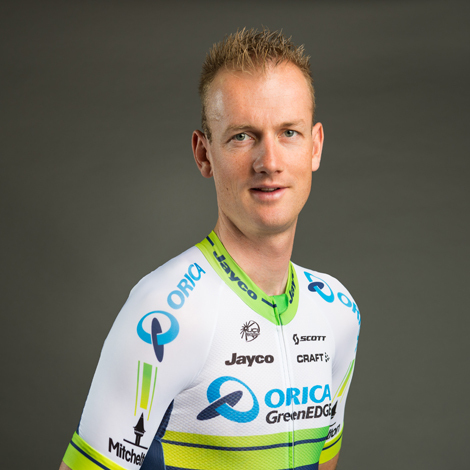 Domenico Pozzovivo followed through in third place, at 41 seconds behind the leaders.

A breakaway group consisting of 14 riders took form at around the 50 kilometer mark in today’s stage. And, at one point, the escapees had developed a substantial lead of 8 minutes over the peloton.

However, with 19 kilometers remaining, Weening initiated an attack of his own, that was quickly followed by Malacarne. From there, the two escapees succeeded in holding off the peloton until the finish.

“The guys weren’t working perfect in the group,” Weening said. “It went slightly uphill and people were taking the wrong side of the round-about. I went on the other side and it was the right timing. I thought maybe we had to try to go before the climb. Malacarne came back and he was really strong. It was a steep part in the last climb, I made a fast speed but I couldn’t drop him. I waited until the last few hundred meters, I could gamble a bit, Malacarne was in the lead," Weening said.

Pozzovivo made a valiant effort to try and bridge himself to the two breakaway riders with a late pursuit in the closing kilometers. However, the lead duo could not be caught.

Meanwhile, Cadel Evans managed to hold onto the leader’s jersey, but not without losing time to Pozzovivo, who gained valuable time for himself during his attempt to catch the leaders.

“The guys controlled things until the move went,” Evans said. “There was a bigger selection which was in our favor because we could control the group. Guys were putting everything on the line and gambling a little more," said Evans.

“We have to be satisfied with our work so far. I’m very happy with our team and they put me in the position I’m in now. I’m very proud of my guys and we will rest well tomorrow.”