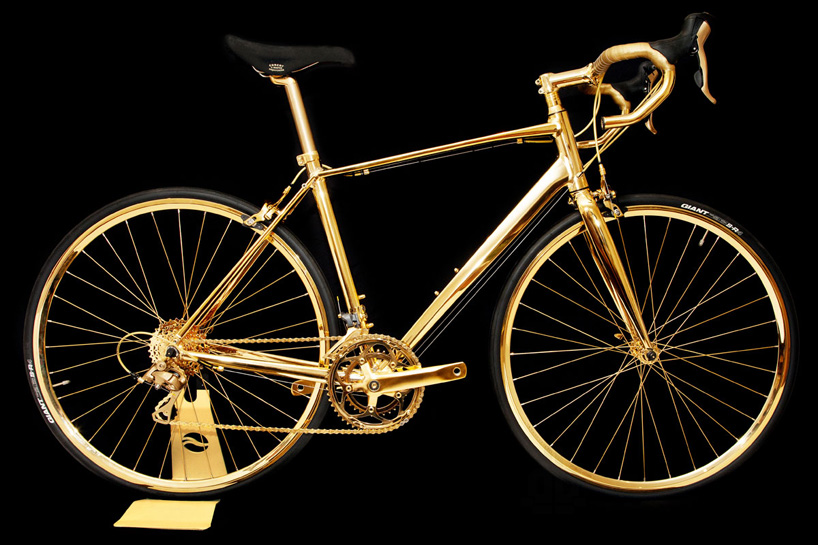 For a cool 400k, cyclists can treat themselves to a 24-carat gold plated road bike from the British design firm of Goldgenie.

If having a bike that’s covered almost completely in the precious metal isn’t enough, lucky owners will also receive diamond embellishments on their bikes as well.

Forget worrying about dangerous motorists though, instead be on the lookout for "gold diggers".  😉

Goldgenie’s in-house team of customization artisans recently completed embellishing a men’s British racing bike with 24K Gold and have elevated this modest form of transport to another level.

Goldgenie’s specialists meticulously applied a lustrous layer of 24k gold to entire structure, from the tip of the drop handlebars to the wheel stays, and every other part in between, including every ridge of the gear chain. The gleaming gold model is offset with sophisticated accents in black in a limited edition soft San Marco suede saddle and SR4 racing tires.

The designers at Goldgenie are currently developing more two-wheeled pieces that clients can bespoke from a selection of different finishes on the saddle and handlebars, including exotic skins and fine leathers and a variety of precious stones.

Striking to look at, the bike is even more beautiful when in fluid motion, as the spinning spokes catch the sunlight and ripples along the golden frame. While this bicycle may not reach the speed of light, the artisans at Goldgenie believe in catching the light as you travel.

The mobile golden masterpiece, to be adorned with diamonds, is available from $390,000 and makes for the ultimate once-in-a-lifetime gift for yourself or someone truly special.