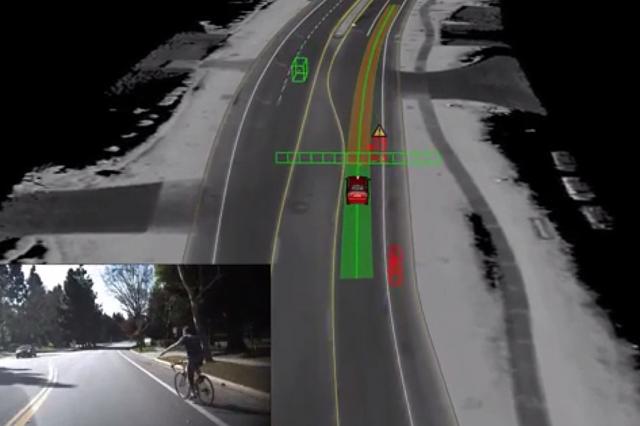 Over the last year, Google’s has turn it’s focus toward city and suburban navigation as it relates to the tech giant’s self-driving cars.

Unlike highways, which are typically straightforward navigation-wise, city driving is full of twists and turns and unpredictable inputs like pedestrians, cyclists, train tracks and, of course, other vehicles.

After logging 700,000 autonomous miles in the Mountain View area near Google’s headquarters, the company has released a new video of the car in action, showing how its 360 degree LiDAR laser scanning technology can take complex traffic situations and make them easy to navigate.

Here’s a bit from Google’s blog post on the video:

As it turns out, what looks chaotic and random on a city street to the human eye is actually fairly predictable to a computer. As we’ve encountered thousands of different situations, we’ve built software models of what to expect, from the likely (a car stopping at a red light) to the unlikely (blowing through it). We still have lots of problems to solve, including teaching the car to drive more streets in Mountain View before we tackle another town, but thousands of situations on city streets that would have stumped us two years ago can now be navigated autonomously.

Here are all of the inputs (pedestrians, cars, cyclists) the car analyzes before making a simple right turn at an intersection.