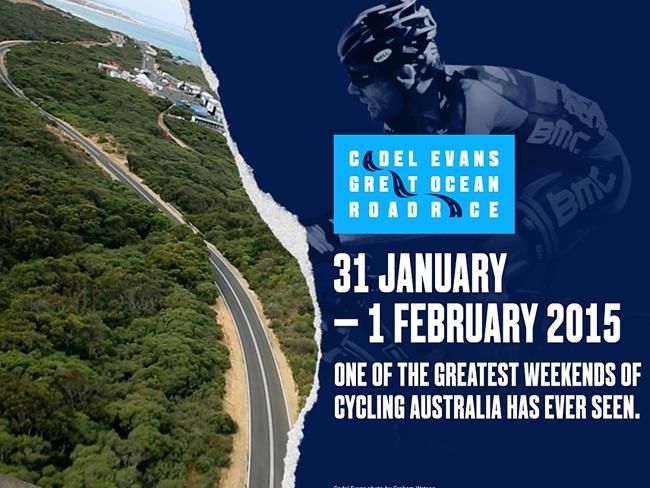 The beautiful Bellarine Peninsula is set to be on show on 31 January and 1 February next year, with Cadel Evans today unveiling the courses for the eponymous Great Ocean Road Race and welcoming Momentum Energy as naming rights partner for the People’s Ride.

The Elite Men’s Road Race has secured a 1.1 classification from the Union Cycliste Internationale (UCI), a significant achievement in the event’s first year. This race, along with the Elite Women’s Race and Momentum Energy People’s Ride, will travel through some of the most beautiful and iconic areas of Victoria including some of Evans’ favourite riding routes.

“This new major event will take elite and recreational riders on a spectacular journey through one of Victoria’s most popular holiday areas and deliver a significant boost to the region’s economy”, Minister Asher said.

Inspired by the prestigious Spring Classics of Europe, the 174km Elite Men’s Road Race will take place on Sunday 1 February 2015, starting in Geelong, travelling past Barwon Heads, Thirteenth Beach, Torquay and Bells Beach before finishing on Geelong’s waterfront. Professional teams including Evans’ BMC and Orica GreenEDGE have already been confirmed to compete.

Also announced today was the first commercial partnership for the event, with Momentum Energy coming on board as naming rights partner for the People’s Ride.

“We are delighted to be a part of the Cadel Evans Great Ocean Road Race, and supporting such a unique and iconic event in Victoria”, said Momentum Energy Managing Director Nigel Clark.

“Cadel Evans has been a fantastic ambassador for the sport of cycling and the country of Australia and we are proud to be associated with someone whose values and behaviours are very much aligned with Momentum Energy’s. In the same way that Cadel has earned his title of being an iconic Australian cyclist, Momentum Energy is a 100% Australian-owned and operated energy retailer that strives to redefine and set the standard in selling renewable energy. Backed by Hydro Tasmania, Australia’s leading renewable energy business, I believe we are well positioned to achieve this”.

There has been overwhelming interest in the Momentum Energy People’s Ride, to be held on Saturday 31 January, and demand is expected to be strong. A priority access period from Monday 3 November is being offered to recreational riders who register their interest before midnight on Friday 31 October.

The Momentum Energy People’s Ride will have two course options – a 107km loop that follows the Elite Men and Women’s races and a shorter 65km circuit.

The three courses have been designed by former professional cyclist Scott Sunderland, who worked with Cadel Evans to create a challenging circuit, which he says features elements of the successful 2010 UCI Road World Championships course and the iconic Great Ocean Road.

“We have created a unique course that pays homage to the Great Ocean Road’s breathtaking views, while ensuring riders are challenged by multiple climbs and varying elevation gains”, said Sunderland.

Places for the Momentum Energy People’s Ride are limited, so interested parties are encouraged to register their interest by 31 October to qualify for the priority entry period.

Applications to volunteer for the event will be open in November.

The Cadel Evans Great Ocean Road Race is the first event of its kind in Australia, and its concept is inspired by the prestigious Spring Classics of Europe. The elite one day race format delivers high excitement and intense competition.

The Spring Classics of Europe are more than gruelling one day bike races; they are drama-filled spectacles with hundreds of thousands of fans travelling from around the world to line the roads, or for locals just stepping out of their front door to join in the festival like atmosphere.

We hope to take inspiration from the Spring Classics and build our own one day classic race in Victoria. Our vision is to create one of the greatest weekends of cycling Australia has ever seen, drawing tens of thousands of people to Geelong and the Surf Coast, to showcase the region.

Victoria is renowned as the sporting events capital of Australia and the Cadel Evans Great Ocean Road Race will be an integral component of the State’s remarkable calendar of annual and one-off international and national events.

As well as generating economic benefit for Victoria, major events such as the Cadel Evans Great Ocean Road Race also help to promote regional Victoria as a great place to live, work and invest. The event also showcases Victoria’s wonderful regional areas and natural beauty to even more people and the People’s Ride is a great way to promote grass-roots participation and encourage people to get active.

ONE OF THE GREATEST WEEKENDS OF CYCLING AUSTRALIA HAS EVER SEEN