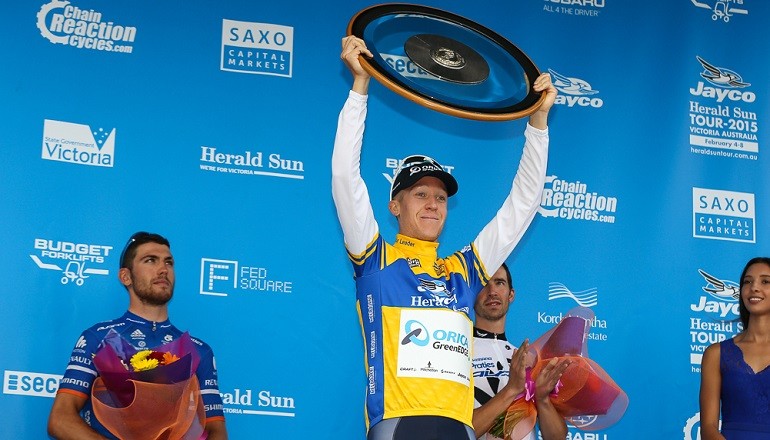 Cameron Meyer has held on to deliver back-to-back overall victories for his team ORICA-GreenEDGE in the 2015 Jayco Herald Sun Tour, following a nail-biting finish on the final stage to Arthurs Seat.

Meyer, having moved into yellow leader’s jersey with Stage 1 victory in Bendigo on Thursday, was the General Classification winner by 11 seconds from Patrick Bevin (Avanti) who won the 122km finale on Sunday. Third overall was Bevin’s teammate, Joe Cooper, 19 seconds in arrears of Meyer.

In winning the 62nd edition of the Sun Tour, Meyer enters an elite club with Stuart O’Grady and Simon Gerrans, having also been victorious in the Tour Down Under.

“It’s huge,” Meyer said of the significance of today’s win. “This is the oldest stage race in Australia and one of the most prestigious.

“To join that honour roll of having the Tour Down Under and the Herald Sun Tour makes me really happy and I know my dad will want that trophy home tonight.”

While the three ascents of Arthurs Seat which decided the race proved the perfect showcase for Bevin’s versatility, Meyer was forced to hang tough and crossed the finish line right on the New Zealander’s wheel, followed by 2014 overall winner, Simon Clarke(ORICA-GreenEDGE) in a time of 2:54:38.

“It was a great feeling to get up that berg for the last time and be there at the pointy end and have enough for the sprint to take out the stage,” explained Bevin. “It’s a great victory and it’s the type of finish I’m beginning to really like.”

Asked by media at the finish about the challenge that he faced right to the finish line, Meyer was frank.

“I was challenged alright,” he said. “That was nearly a WorldTour bike race – that was unbelievable. I’ve never experienced something like that in a Herald Sun Tour. That was just ridiculously fast so I’m glad that’s over and I’m happy to get second. That’s a good effort on this hill.

“Hats off to Pat Bevin, he rode a great race and so did Avanti but my boys were really good,” Meyer continued. “I only had to do 200 metres of the whole race so it was fantastic.”

While much had been made of the fact that 21 riders sat within 35 seconds of Meyer’s overall lead heading into the final stage, each and every classification was there for the taking as the neutral roll-out began on the top of Arthurs Seat.

The move for Bayly was a little more strategic, as he chased points for the KOM classification.

“I saw a little move go up the road pretty early on and I thought, ‘I’ve got to get in this’,” Bayly explained. “It was a big group and there were some strong guys that really wanted to get a gap before the climb.”

Von Hoff drew equal with Ewan for the green jersey with his win in the first intermediate sprint, in memory of Hec Sutherland and Balnarring. But with points up for grabs on the finish line at the end of the stage, only a miracle would keep the two sprinters in the lead of the classification with Meyer also in contention.

With Avanti and the Jayco-AIS Australian Under23 team taking responsibility for the chase, the breakaway only got out to a maximum lead over the peloton of just under two minutes. At the start of the first ascent of Arthurs Seat, their lead was a minute.

As the gruelling three kilometre climb kicked in, the casualty list grew with some hairpin turns boasting an 18% gradient. Bayly led Putt and Handley over the top of Arthurs Seat at the end of the first lap with Power giving chase with Sam Spokes (Drapac). The five would come back together on the descent while all the general classification contenders were riding together.

Just 40 seconds separated the quintet from the peloton, and Avanti began their chase of the Sun Tour title in earnest while ORICA-GreenEDGE were content to play a waiting game. Bayly once again was first man across the top of the climb, ensuring his victory in the KOM classification while Putt, Handley and Von Hoff followed.

“I’m glad that I could really step up for the boys and give them something in return,” Bayly explained with his team hit by bad luck throughout the tour with three withdrawals through injury and illness.

The peloton made 33 seconds up on the break over the second lap and Bevin was led through for the final lap by teammates Pat Shaw with Mark O’Brien following.

The breakaway’s time at the front of the race was eventually brought to a close before the start of the final ascent and 20 riders remained in contention for the overall victory with Chris Hamilton (KordaMentha Australian National Team) the only rider dropping off the pace.

Avanti were in control of the tempo with Androni Giocattoli also lending a hand in a bid for the chances of Franco Pellizotti. With two kilometres left to race, Lachlan Norris (Drapac) was the first attack, gaining 30 metres on the group before being dragged back. Under the red kite for the final time, the large group was still intact, before Power played his bid for victory, only to be chased down by Simon Clarke and Meyer who was also able to move into the sprint classification lead. Bevin saw his chance and was more than satisfied with a stage win, moving up to seconds in the General Classification.

“We threw it at them and we gave it a good nudge and to come away with a stage win is consolation for sure,” said Bevin.

“It’s a pretty tough finish for me. Hilltop finishes are never easy and to be there with that calibre, there was only a handful of guys left in contention.

“It says pretty good things about my form and it’s a luxury to be able to sprint on top of that,” he concluded.

Power, fifth across the finish line, swapped his KOM polka dot jersey for the white jersey as the best Under23 rider.

“The guys did everything and I can’t thank them enough,” he said. “They literally just dug so hard today and it was amazing.”