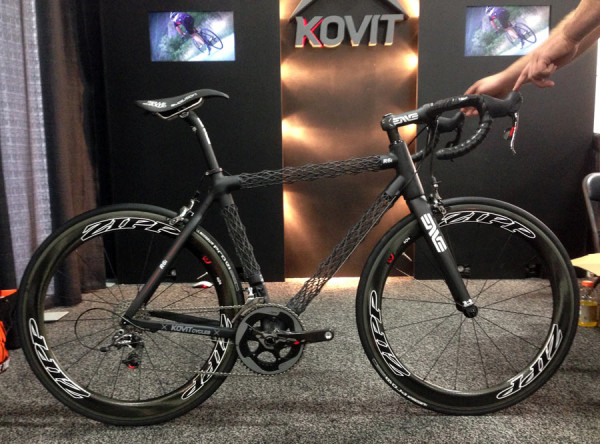 The concept of orienting carbon fiber in the form of an "isotruss" was first revealed back in 2008 by a little known bike experimental group called – Delta 7. And, beyond a brief showing at various and sundry shows over the next year or so, the brand all but vanished.

Jumping ahead to this year’s 2013 InterBike Show, the technology reappeared. But, this time under the auspices of a new group of designers called – Kovit Cycles. Indeed, there’s every indication that the new "platform" not only extols the virtues of the original eye-catching technology, but in the interim, has encompassed many of the general advancements that have taken place over the last few years relative to bike design.

A tapered headtube, PFBB30, internal cable routing, and the use of standard carbon fiber in the areas of the seat collar and BB shell are a few obvious improvements.  Dig !

The three-dimensional, yet relatively simple geometry of IsoTruss® grid structure provides substantial resistance to local and global column buckling, while lending itself to cost effective fabrication using batch or automated continuous manufacturing techniques. IsoTruss extrapolates the traditional 2-D triangle based truss to a 3-D truss made up of pyramids formed by isosceles triangles.

The IsoTruss® can support axial tension or compression, torsion, or flexure (bending) loads, or any combination thereof. Each individual member carries primarily axial loads, taking full advantage of the inherent strength and stiffness of continuous fiber-reinforced composites. IsoTruss structures are particularly effective when replacing structures that were stability-critical designs.

IsoTruss® achieves its incredibly high strength-to-weight ratio with a special geometry that uses longitudinal and helically wound members. The "iso" and "truss" in "IsoTruss" come from its efficient geometry; isosceles triangles that form a truss of pyramids which are what give the IsoTruss its unique strength and stiffness.

The IsoTruss® incorporates stable geometric forms with members that spiral in a piecewise linear fashion in opposing directions around a central cavity. The helical and longitudinal members are repeatedly interwoven, yielding a highly redundant and stable configuration.

Geometric variables include the number of nodes in a cross-section (e.g., 6, 8, etc.), diameters of the individual members, single versus double geometry, straight versus simple or complex curved segments, and uniform versus tapered overall diameter.

Naturally, any fiber and resin combination can be used to fabricate the IsoTruss grid structure, although the web-like geometry lends itself to high performance fiber-reinforced polymer composites (e.g., carbon, fiberglass, aramid, or basalt fibers with an epoxy, vinyl ester, or polyester resins, etc.).