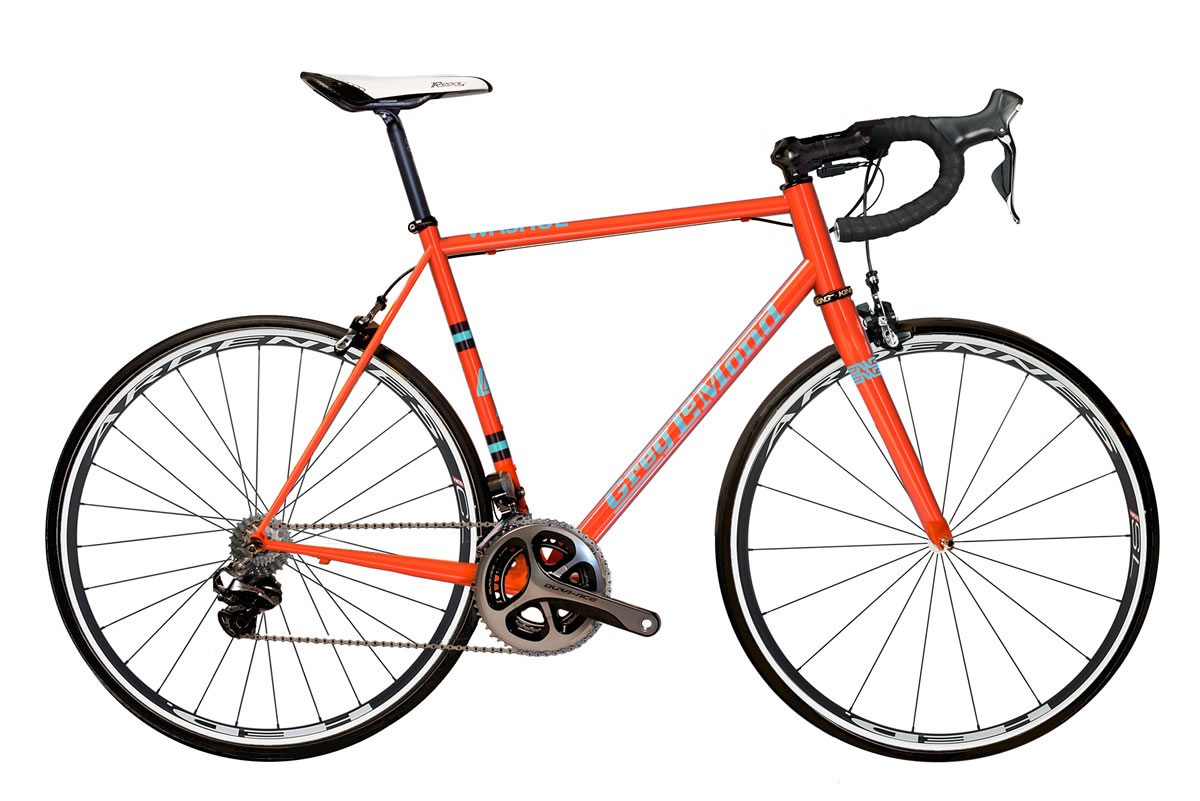 There have been rumors over the last several weeks, that Greg LeMond was preparing to launch a new bike under his namesake, to the delight of classic steel lovers.

The new bike gets it’s name from the county and Native American tribe indigenous to where LeMond grew up – Washoe.

“The Washoe tribe were native to that area. The name Washoe means ‘People from here’. That’s where I became a cyclist, and this company has a lot of roots, there.” – Greg LeMond

The Washoe is hand made and painted here in the USA. And, it features use of Reynolds 853 steel, along an ENVE carbon fork for the build. In addition, it’s compatible with both electronic and mechanical groupsets. Oddly, though, LeMond chose to equip the new frame with a PressFit 30 bottom bracket that requires the use of PF30 adapters. Strange for such a classic design ?

According to LeMond, the Washoe can be pre-ordered, with the first bikes expected to ship around the start of next month. Complete bikes will range from $2,599 for a 105 built, to $5,999 for Dura Ace Di2 with Campagnolo builds available soon.

Handmade, hand painted and professionally assembled in the USA, Washoe is named after the county on the East slope of the Sierra mountains in which LeMond grew up and began riding. LeMond points out further relevance to the name, “The Washoe tribe were native to that area. The name Washoe means ‘People from here’. That’s where I became a cyclist, and this company has a lot of roots, there.” Each frame is handmade in the USA from Reynolds 853 steel and yields a dedicated butting process per size ensuring that even the smallest and largest frames have the same incredibly smooth, yet laterally stiff, ride qualities that we demand. Once welded, the frame goes through a stringent quality control process before Greg LeMond’s logo is added. Instead of the normal process of using decals, each part of this frame and fork is hand painted in the USA. The only decal you will see will be the proud Reynolds 853 logo attached near the bottom of the frame. The attention to detail, pride in manufacturing and passion for creating a beautifully crafted frame that provides a smooth ride that begs to push it harder is the essence that were after with the Washoe.

The Washoe has been carefully engineered employing the frame geometry philosophy that LeMond made famous. “LeMond Geometry” is what Greg arrived at after riding so many custom frames over the years and going back to the drawing board over and over. Fork choice on a bike is paramount. The handling and ride characteristics of a bicycle are greatly altered by it’s fork. LeMond chose the top-of-the-line Enve Carbon Tapered fork. “It completes a bike that our customers will be happy to ride on their most epic rides, regardless of terrain.” LeMond adds, “The Enve fork enhances the way the bike climbs and responds out of the saddle. You quickly realize ‘I can ride this bike anywhere’, and it rewards you for doing exactly that.”

Much of the LeMond philosophy of bicycle design centers around “integrity” and “feel”. That probably comes from years of riding some of the most historic – and sound – steel bikes ever crafted. LeMond tested a lot of equipment, which gave him more of an appreciation for well made bicycles. “I learned early that solid ride characteristics, comfort, and safety help you win, too.” Turning pro for the world #1 team Renault-Elf brought that lesson home further. The philosophy there was to ride the sturdiest, best handling, most comfortable bike possible.

Steel remains a great choice for high end bicycle production, its production and characteristics have continued to evolve but retain the fabled ride quality no other material can quite match.

The Washoe is available as frame and fork or as a complete bike. LeMond delivers the bike professionally assembled and ready to ride to your home or favorite bike shop in four different build kits: Shimano 105, Ultegra, Ultegra Di2, or Dura Ace Di2.