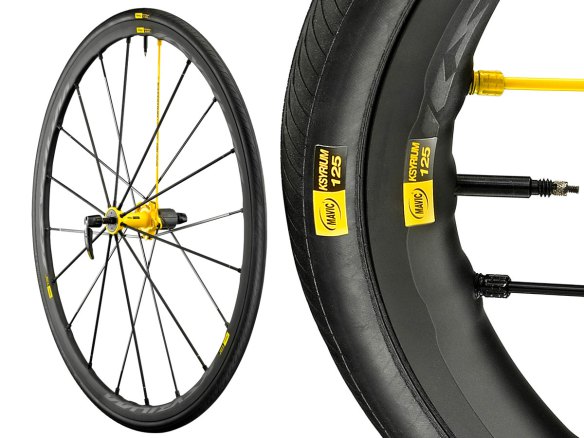 Very few cycling brands can boast having a heritage as steeped in the sport as Mavic.

This year, the iconic French brand is celebrating it’s 125th anniversary with a special edition wheelset aptly named – the Ksyrium 125.

So what differentiates the 125 from previous Ksyrium wheels ?  Well, in addition to Mavic’s patented FORE drilling, the 125’s utilize a new development in the company’s ISM (inter spoke milling process) called ISM 4, wherein the entire rim is now milled at once. This in turn reduces weight considerably by eliminating rim material throughout the entire wheel. Moreover, the new technology yields a rounder, more  aerodynamic profile, which in all likelihood should allow the 125 to cheat the wind a little better.

The new Ksyrium tips the scales at a scant 1370 grams, which makes it one of the lightest alloy clinchers on the market. Of course no special edition wheel would be complete without some special markings. Indeed, the anniversary wheel not only features Mavic’s traditional black on black Exalith finish, but they also include bold yellow accents on a single drive spoke, as well as the hubs. There are also some signature labels on the hubs and rim itself, that  identity them as "Ksyrium 125".

According to Mavic, only 6000 of these wheelsets will be available, with each one being individually numbered. With the Tour de France not too far off in the future, it might be wise to snag a set now.