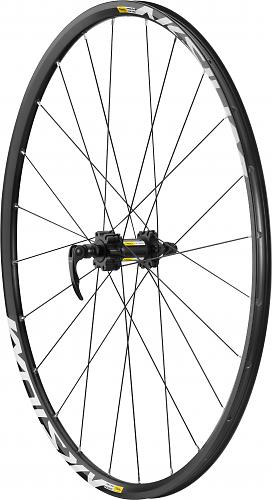 After much anticipation, Mavic finally enters the disc wheel segment, with two new road models, as unveiled at this year’s EuroBike show.

The new Aksium One Disc and Ksyrium wheelsets are aimed at satisfying "roadies" at both ends of the spectrum in terms of price and performance.

According to Mavic, the Aksium One will feature a wider brake track in order to satisfy riders wishing to capitalize on the current "gravel" or "sportive" bike trends.

The One’s hubs will be available with either 6 bolt or Shimano’s Centrelock disc mounting, with the internals being sealed cartridge bearings, along with 24 straight pull round spokes used in the configuration of both wheels. Mavic claims a weight of 1,965g for the wheelset (890g front, 1,075g rear).

In addition, the front wheel can easily be switched between regular 9mm quick release or 15mm thru-axle, by simply changing the axle end caps.

The price for the Aksium One Disc will be around $300, will an expected release date sometime this fall.

Similar to the Aksium One, the new Ksyrium Disc will also be available with either 6 bolt or Centrelock disc mounts. However, the Ksyrium will feature Mavic’s upper-end, carbon front hub shell and full aluminum rear hub shell, along with the company’s ISM 4d rim technology, which is designed to remove excess weight between the spokes.

According to Mavic,  the Ksyrium Disc weighs in at a laimed 1,535g (680g front 855g rear). And, in keeping with Mavic’s Wheel Tire System (WTS), the wheelset will include a set of 25mm Yksion Pro tires.

Expect to see pricing and availability released sometime this fall as well.