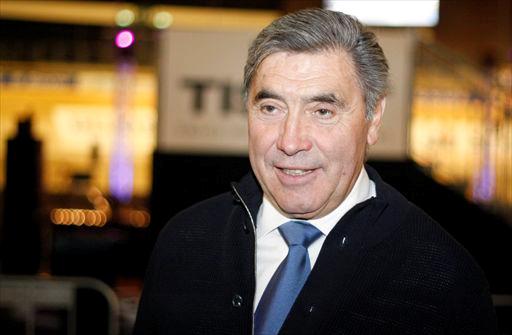 Eddy Merckx says that Jens Voigt can beat his long standing hour record of 49.431 kilometers that he set back in Mexico in 1972.

Voigt will become the first rider to attempt the hour record, since the UCI decided to amend its rules earlier this year. Previously, cycling’s governing body had set restrictions on the type of bike and equipment that a rider could use, which deviated from that of Merckx’s era.

However, today Voigt won’t be trying to beat Merckx’s record, but rater the one set by Ondřej Sosenka in 2005, which was later rescinded by the UCI under its change of rules.  Merckx believes that the recently retired German can better the Czechoslovakian’s time.

“Although I expect to see him do unnecessary extra yards because of his style,” Merckx jokingly told the french newspaper L’Équipe. “He will benefit from new hardware, more efficient, relative to Boardman and Sosenka, who themselves have used a different material to mine."

“I am the last to do it with a normal frame, wheels, straight spokes, helmet, socks and pedals with straps. In 2000, Boardman was already using a shaped helmet, clipless pedals and wheels with bladed spokes, making big differences in watts. In Mexico City, with simply adding clipless pedals, I would have easily exceeded 50 km in an hour."

In an interview with the Belgian newspaper, Sporza, Merckx went onto say that Voigt’s chances were 50/50. And, despite his confidence at winning virtually any race, Merckx said setting the hour record was the hardest challenge of his career.

“Getting off the bike, I felt like a paralytic, with the impression that I planted needles in my buttocks. I drank gallons of water and beer, without being able to urinate, and for three or four days I couldn’t walk,” he told the French paper. “I went too fast…it was in my nature, and nothing could stop me.”

Merckx’s record stood for 12 years before it was beaten by Francesco Moser in 1984, on the same Mexico track. Throughout the mid ‘90s there were several attempts to beat Moser’s record, before the race fell out of favor due to the new regulations. Now that the UCI has lifted its restrictions, the goal is to reinvigorate the prestigious event.

“It was very prestigious, moreover, all the great have tried, except Bernard Hinault,” said Merckx. “Today, the UCI has restored order, it is a good thing. For if the record had lost interest, it was because of these constant changes in regulation.”