New Book: "Cycles of Lies: The Fall of Lance Armstrong 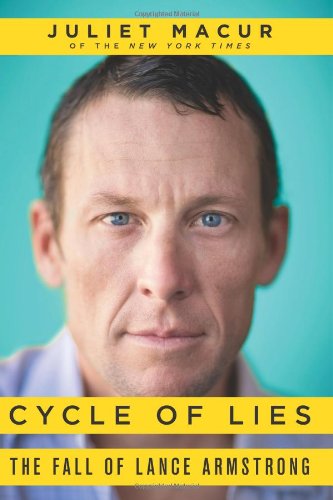 Just when you thought you’ve read all that could be told about Lance Armstrong’s dramatic fall from grace, but another book emerges – further chronicling the defrocked cyclist’s trials and tribulations in the cycling world.

The book "Cycles of Lies: The Fall of Lance Armstrong is written by New York Times sports columnist Juliet Macur. She covered Armstrong extensively during his run to the top. In an article that excerpts parts of her book, Macur writes:

"I’ve interviewed him one-on-one in five countries; on team buses that smelled of sweat-soaked Lycra at the Tour de France, in swanky New York City hotel rooms, in the backs of limousines, in soulless conference rooms; and for hours by telephone."

Now, in the spring of 2013, after his whole world has come crashing down and moving trucks are en route to dismantle his beloved estate, I’ve come to visit him at home in Austin, Tex., for the first time.

Yes, fine, come on out, he said. Troubled by endless obituaries of his celebrated (and now fraudulent) career, he wanted to ensure that I wrote ‘the true story.’"

Macur states that she was able to obtain interviews with some of his closest friends, tapes from a former confidant and obtain accounts from the family on whom he shunned.

The tapes from J.T. Neal, a friend of Armstrong who died of cancer in 2002, not only give evidence that he knew of his doping, but of him doing it out in the open with other cyclists.

Macur points out that if Armstrong loses all of the lawsuits filed against him, he would owe $135 million. Macur writes that by June of 2013, several of his sponsors have dropped him forcing him to scramble for cash. Armstrong calls them traitors saying it was he who helped put them on the map. In a desperate dash for money, Macur writes about Armstrong selling his property and many of his prized possessions.

It’s a look at man who still does not fully realize that he’s responsible for his own fall. Armstrong’s lack of humility continues to be one of his major flaws, but it was that arrogance that helped him "win" the seven Tours de France.

"Cycle of Lies: The Fall of Lance Armstrong" to be published by Harper Collins will be available in bookstores and on iBooks on Tuesday.