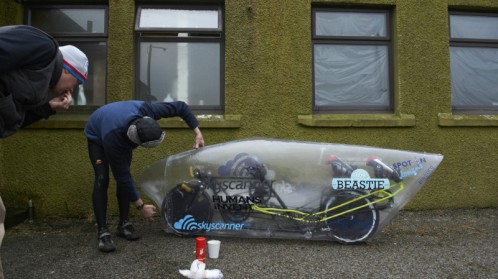 The ninth edition of the Amgen Tour of California will feature an elite international field of professional cycling teams made up of World Champions, Olympic Medalists, Tour de France stage winners and other accomplished cyclists. Today AEG, presenters of the race, announced the first nine cycling teams selected to compete in America’s largest cycling race taking place May 11-18, 2014, over nearly 700 miles of roadways, highways and scenic routes throughout California.

“After the first time I raced in the Amgen Tour of California I immediately knew I wanted to come as many times as possible,” said Peter Sagan, Cannondale Pro Cycling. “Over the past four years I‘ve had some of my best performances here. The Amgen Tour of California will always be a priority in my season, I hope to continue to have great results again this year and win another green jersey. I think green and gold is a good combination!”

Also racing will be three of the top United States-based teams: Team Garmin-Sharp, Trek Factory Racing and BMC Racing Team, which took home the overall team win in the 2013 Amgen Tour of California. Overall, six of the teams named today to the field finished in the top-10 of the 2013 World Rankings.

“I take pride in the fact that I participated in every single edition of the Amgen Tour of California since it started!” said Jens Voigt, Trek Factory Racing. “I love this race and have seen it grow and become bigger and better every year! And now, going into my last season as an active pro rider, I want to be part of this spectacular race once more!! California, here I come!”

“Each year we strive to secure an elite field of cyclists to bring fans one of the best races in the world, as well as create an increasingly competitive landscape for the riders,” said Kristin Bachochin, executive director of the Amgen Tour of California and senior vice president of AEG Sports. “It’s exciting that we have the opportunity to expand our field with an additional UCI Pro Team this year, which will make for even more exciting competition each day of the event. We’re looking forward to a race that will likely be our most exciting ever.”

Since its inaugural race in 2006, the Amgen Tour of California has consistently drawn the world’s best cycling talent while growing to become one of the most important races on the international calendar. With a recent change to UCI 2.HC sanctioned events regulations, the 2014 Amgen Tour of California will be the first-ever U.S.-based stage race to host a field that is comprised of more than 56 percent of UCI Pro Teams – the largest-ever (by percentage) for a race on U.S. soil. Previously, race organizers were limited to hosting a field that was no more than 50 percent comprised of UCI Pro Teams.

“The Amgen Tour of California has grown in stature and importance over the years and Team Sky is looking forward to competing this May, said Carsten Jeppesen, head of Technical Operations for Team Sky. “Race organizers always provide a challenging course and California fans are wonderful!”

“The Amgen Tour of California became a really important event in our race schedule over the past many years,” explained Roberto Amadio, Cannondale Pro Cycling Team Manager. “As a global team we get to race around the world and everyone loves to race in USA. The Amgen Tour of California has become a priority for our team to attend. Every time we come to California we find a high level of organization, as well as a wonderful public setting. This makes American racing very special, people enjoy cycling and we enjoy racing in front of them.”

The 2014 Amgen Tour of California will host sixteen teams, including the following nine UCI Pro Teams:

The remaining teams will be announced in February 2014.

For further information about the teams competing in the 2014 Amgen Tour of California, please visit www.AmgenTourofCalifornia.com.

The 2014 Amgen Tour of California is an eight-day stage race that will start May 11 in front of the state’s Capital Building in Sacramento and travel through an additional 11 host cities including Folsom, San Jose, Mount Diablo State Park, Monterey, Cambria, Pismo Beach, Santa Barbara, Santa Clarita, Mountain High, Pasadena and Thousand Oaks.

About the Amgen Tour of California
The Amgen Tour of California is a Tour de France-style cycling road race created and presented by AEG that challenges the world’s top professional cycling teams to compete along a demanding course that traverses hundreds of miles of California’s iconic highways, byways and coastlines each spring. The teams chosen to participate have included Olympic medalists, Tour de France contenders and World Champions. More information is available at www.amgentourofcalifornia.com.