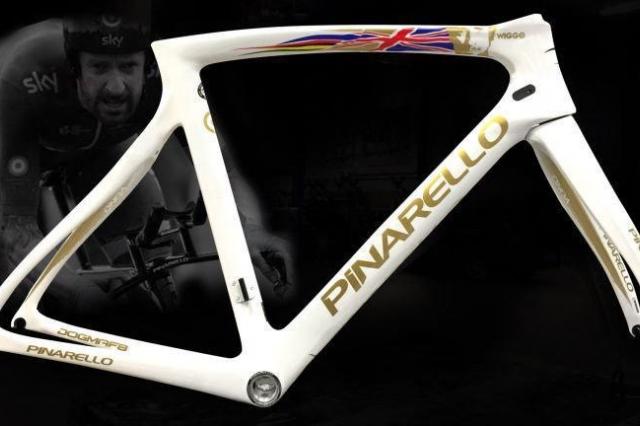 To celebrate the extraordinary career of Team Sky’s Sir Bradley Wiggins Pinarello has created a special Dogma F8 frame, which will make its debut in the Time Trial at the Tour of Qatar. On the top tube is a gold image of Sir Bradley Wiggins alongside the Union Jack and the World Championship rainbow colours. The frame also lists Wiggo’s most remarkable victories in his career including the Tour de France and his World and Olympic titles on both the road and the track. As a tribute to the British cycling champion this unique collectors piece will be produced in limited edition by Pinarello to celebrate Sir Bradley Wiggins as the British, World and Olympic Time Trial champion.
http://www.pinarello.com/en/pinarello-dogma-f8-wiggo-tribute-thank-you-sir