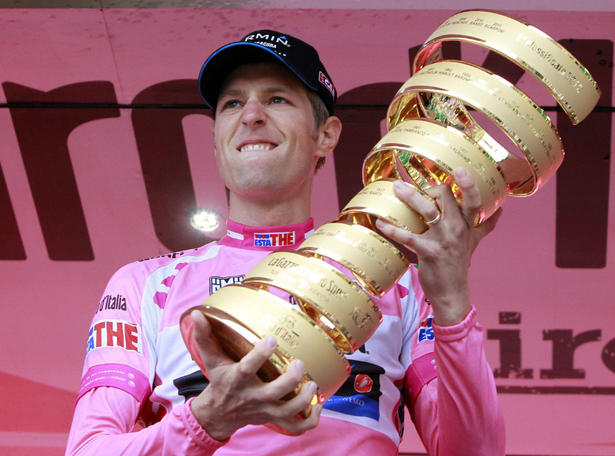 Ryder Hesjedal, winner of the 2012 Giro d’Italia, admitted today that he "doped" more than 10 years ago.

"I have loved and lived this sport but more than a decade ago I chose the wrong path," said the Garmin-Sharp rider in a statement.

"Even though those mistakes happened more than 10 years ago, and they were short-lived, it does not change the fact I made them and I have lived with that and been sorry for it ever since."

The statement came in response to allegations by Danish cyclist Michael Rasmussen who said earlier on today he taught Hesjedal how to take the banned blood-booster erythropoietin (EPO) in 2003.

Rasmussen was released from the Rabobank team while he was leading the Tour de France in 2007 for having lied about his whereabouts to doping authorities.

His claims were made in a book, whose extracts were published by Danish newspaper Politiken on Wednesday.

Rasmussen was at Rabobank in 2003 while Hesjedal, then a mountain bike rider, was in the Dutch outfit’s development team.

"I believe that being truthful will help the sport continue to move forward, and over a year ago when I was contacted by anti-doping authorities, I was open and honest about my past," said Hesjedal.

The Canadian cyclist was one of several riders – past and present – and managers to be called on to testify by the U.S. Anti-Doping Agency (USADA) in the case against Lance Armstrong, who was stripped of his seven Tour de France titles for doping.

Hesjedal was one of Armstrong’s team mates at U.S. Postal and Discovery Channel in 2004 and 2005.

Having joined Garmin, a team built on a strong anti-doping stance, Hesjedal is confident his sport is on the right path.

"I have seen the best and the worst of the sport and I believe that it is now in the best place it’s ever been," he said.

Garmin-Sharp said they were backing their rider.

"As we have previously stated, our expectation is that anyone in our organisation contacted by any anti-doping authority must be open and honest with that authority," a team statement read.

"Ryder is no exception and a year ago when he was contacted he cooperated fully and truthfully testified to USADA and CCES (Canadian Centre for Ethics in Sport).

"For this reason and because of our desire for 100 percent truth and reconciliation in the sport of cycling, we support him."

In January, Armstrong admitted to years of using performance-enhancing substances during his career.