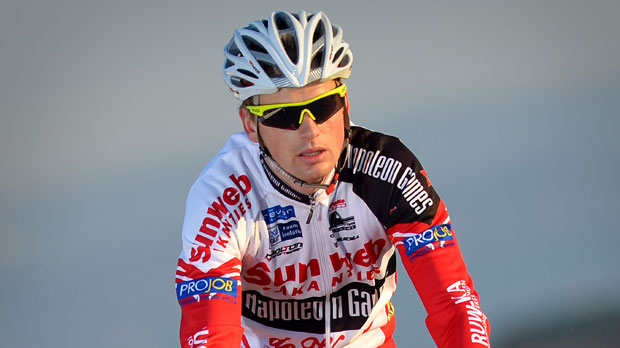 Kevin Pauwels (Sunweb-Napoleon Games Cycling Team) won the Noordzeecross round of this year’s Superprestige series in Middelkerke today, after taking advantage of a mid-race "bobble" by World Champion Mathieu van der Poel (BKCP-Powerplus Cycling Team), that gave the Belgian rider enough of an advantage to seize the victory.

In his usual fashion, Van der Poel got off to an early lead, and began pulling away from Pauwels, Wout van Aert (Vastgoedservice-Golden Palace Cycling Team) and Lars van der Haar (Giant-Alpecin), when he crashed coming off a small bump into a sand section.

From there, Pauwels and van Aert rode several laps together at the front, before today’s winner succeeded in gaining a slight advantage over van Aert – after  bunny hopping his way through a set of barriers.

Pauwels continued to build his gap from there, as van der Poel slowly made his way past van der Haar and then van Aert. Still, the World Champion fell just short of bringing back the leader.

The first lap of today’s race, was a tense battle between Wyman, Cant and her Young Telenet Fidea teammates, Pavla Havlikova and Nikki Harris.

However, from there on, Havokova and Harris began to fade, while Wyman continued to challenge Cant.

After the second lap, Cant began to set a pace that proved to be too high for Wyman, who quickly dropped back just in front of the chase group.

Back in chase, Van den Driessche and Verschueren, continued to stir things up, especially as they rode through the sand sections.

Back up front, Cant continued to increase her lead over over Wyman. And, as she entered the final lap, it was clear that she was well on her way to seizing the victory.

This left the race to a battle for second place, after Van den Driessche succeeded in bridging her way to Wyman – at the start of the final lap.

At one point, Van den Driessche managed to open up a slight gap over Wyman – through the sand section. However, Wyman eventually made her way back up Van den Driessche, only to drop the Belgian rider during the last half of the final lap – to claim second place.