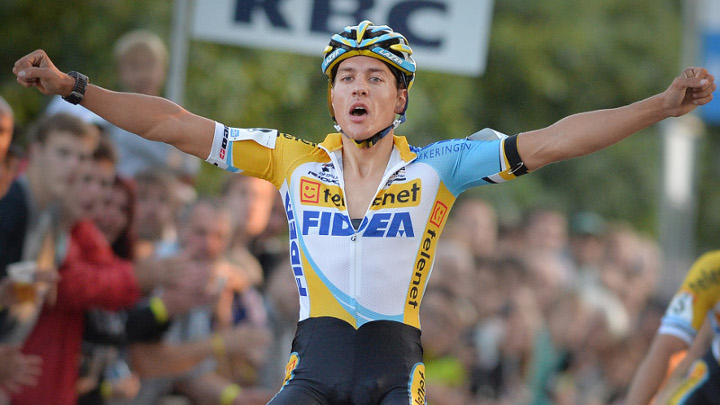 Tom Meeusen claimed his first cyclocross victory of the season, after winning the Superprestige race in Ruddervoorde today.

The Belgian emerged as the fastest rider, after crossing the finish ahead of Mathieu van der Poel, Klaas Vantornout and Sven Nys  – in a four-man sprint.

During a very fast race, a lead group of 8 riders dominated the field, with Nys, van der Poel, Vantornout, Meeusen, Lars van der Haar, Jens Adams, Kevin Pauwels and Corne van Kessel, out front for most of the race. And, despite several splits throughout the race, the field came back together each time.

However, at the start of the final lap, Kessel was dropped by his companions for good,  while Nys and Adams fell slightly off the pace as well. Still, the duo managed to bridge themselves back to Meeusen and the others, at the halfway point on the race.

From there, Meeusen launched a fierce attack and spent most of the final part of the race out front alone with a slight 2 second advantage over his chasers. Meanwhile, Vantornout was doing all the work back in the chase, while Nys was riding at the back of the group.

In the sand section just before the entrance of the finishing straight, Vantornout, Pauwels, van der Poel and Nys bridged the gap after the latter had used his technical skills to move up in the group. However, no one managed to pass Meeusen, and it was the Telenet-Fidea rider who led the group onto the final asphalt section – after Pauwels had been sidelined with a mechanical problem.

As soon as they hit the finishing straight, Meeusen launched his sprint – leaving his rivals to struggle in his wake. Van der Poel passed Vantornout to take second, while Nys rolled across the line in fourth.

One week ago Tom Meeusen vented his frustration over another near-miss when he finished fourth in the Superprestige race in Zonhoven. Today he finally made it onto the podium in a major race and when he did so, he even took the win.

As a result of his second place finish today, Van der Poel moves up into the overall lead in the Superprestige series – one point ahead of Nys, while van der Haar is in third, one point behind.

Sanne Cant (Enertherm-BKCP) added another win to her tally, after she won the women’s Superprestige race in Ruddervoorde today – ahead of British champion Helen Wyman (Kona) and Ellen Van Loy (Young Telenet-Fidea).

For six laps, Cant cruised her way around on the course – well ahead of her rivals, to easily secure today’s victory.

“I’m pleasantly surprised I can bring two wins home in one weekend. I didn’t plan to get away so early but once there I figured I could try to see how long I held on to it, and make a good training ride out of it”.

In the meantime, Wyman and Van Loy tried to stay onboard with the Belgian rider, but instead they kept losing ground.

“She got the gap on the off-camber section where it was tight to make it to the top or not. I made it three times out of six. Ellen couldn’t close it down and me neither,” Wyman said.

From there, the race became a battle for second place, with Van Loy briefly taking over the lead. However, Wyman managed to surged forward in the closing laps – to secure second spot on the podium.

“It was a good battle. I made the gap in the sand and slowly rode away from her,” Wyman said.

There’s no general classification for the Hansgrohe Superprestige series in the Women’s category.