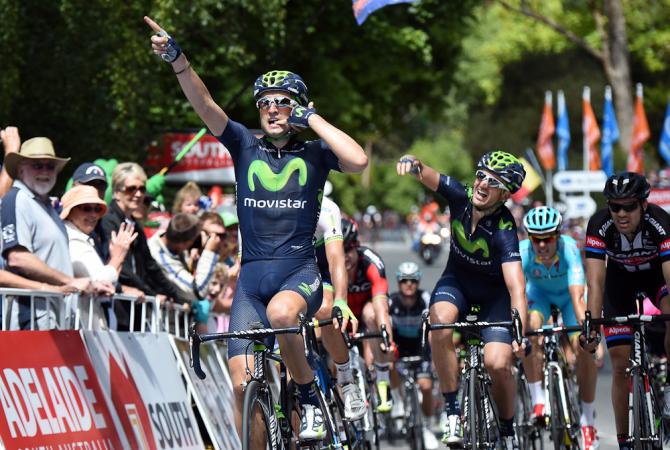 Twenty-six year old Lobato launched a powerful surge on the uphill drag into the Adelaide Hills hamlet of Stirling to claim his eighth win as a professional. He held off South African Daryl Impey (Orica-GreenEDGE) with Lobato’s Movistar team mate, Gorka Izaguirre Insausti, completing the top three.Spain’s Juan Jose Lobato Del Valle has claimed victory in the southaustralia.com Stage 2 of the Santos Tour Down Under to move within three seconds of the overall lead of Soouth Australian Jack Bobridge.

"It’s a victory on a different type of terrain for me," said Lobato who on Sunday was second in the super fast sprint finish of the People’s Choice Classic. Today he showed he also has the legs for an uphill sprint.

"I’m coming here in good form, but thanks to God, I was able to deliver victory for the team," said Lobato. "We have a great team here, we’re always at the front at every race we go to."

"I am very content to start the season like this and I am grateful for my team," he said. "I’ve had two years of good results, and I couldn’t start off 2015 any better."

But even though he is now sitting second overall he admits the team has other riders with aspirations to win overall.

"I am not discounting anything (but) I came here to go well on this finale (stage finish) and I’ve raced here the past two years," he said adding that Movistar used last week for targeted training on the Stage 2 route and in particular the Stirling circuit.

The best laid plans were almost derailed however when Lobato punctured in the last 25 kilometers.

"We knew that Lobato was climbing well, and that he could get up the difficulties better than the other sprinters but he used a bit of energy to chase back (after the puncture) so we were not sure going into the final sprint how he would react," said Movistar Director Jose Luis Arrieta. "It’s a very important victory for us, and for his confidence as well."

For Bobridge the support from the side of the road provided extra incentive, if any was needed, to dig deep for the Santos Ochre Leader’s Jersey.

"It wasn’t an easy ride after yesterday’s," said Bobridge who was a driving force in a four man breakaway that led to first first stage win in the Tour. "It was pretty lumpy from the word go, it wasn’t much flat today, it was super hard indeed.

"I take my hat off to my team-mates, they’ve been sensational," said Bobridge of the UniSA-Australia riders. "I was following Richie Porte (Team Sky) with one kilometer to go. He gapped me but luckily other riders kept me connected with the bunch."

That meant he finished in the middle of the group of 50 odd riders who were awarded the same time as the stage winner.

"I came here to look after the young guys but now I’m in the jersey and I’m one hundred percent focused on defending this ochre jersey."

Bobridge is due to make an attempt on the prestigious hour record but that is for next week.

"Now it’s all for this jersey," he said. "All the way, there were people cheering for me, it’s fantastic."

Today’s stage travelled along a 150 kilometer course starting in the stylish Adelaide suburb of Unley before climbing to Windy Point, through Upper Sturt and onto the testing circuits through Stirling in the Adelaide Hills.

The riders set off under cloudy skies and cool conditions, perfect for the 122 thousand fans who lined the roads.

The stage featured a Category 2 climb in the Subaru King of the Mountain (KOM) competition and two intermediate iiNet Sprints.

The climb came at the 30 kilometer mark but the roads leading up to it were testing on the legs prompting a flurry of early attacks.

Eventually the one that stuck was launched by West Australian Cameron Meyer (Orica-GreenEDGE) who was joined by compatriot Campbell Flakemore (BMC Racing) and Belgian Thomas De Gendt (Lotto Soudal).

That result put De Gendt level on points but second on countback to overnight Bobridge at the top of the Subaru KOM standings.

"It was a hard start and that’s the kind of start I like in a race," he said. "To get away in these conditions, you have to be one of the best in the field so I knew the riders away with me would only be good riders."

By the time the trio arrived at the 1.3 kilometer tester with a seven percent gradient they had set up a handy lead. De Gendt collected top points ahead of Flakemore and Meyer with South Australian Miles Scotson (UniSA-Australia) leading the peloton across the summit just over three minutes later.

At the first of the iiNet sprints in Verdun at the 50 kilometre mark De Gendt picked up six points and the maximum three second bonus ahead of Meyer and Flakemore.

The trio’s lead hovered between three and four minutes as the race wound it’s way   through the Adelaide Hills towards Stirling for the first of two laps to finish the stage.

As the leaders approached the second iiNet Sprint at Mylor, 50 kilometers from the finish, their lead had been whittled down to under two minutes as Team Sky, IAM Cycling and Bobridge’s UniSA-Australia team mates upped the chase pace.

"At the team meeting this morning, we decided to ride GC for (Australian) Adam Hansen," said De Gendt. "Four years ago I also broke clear with (eventual overall winner) Cameron Meyer and I’ve done it with him at other races too. He was the strongest today.

"In the intermediate sprints I wanted to take some seconds, not for myself but for taking them away from potential rivals for Hansen," explained De Gendt.

Once the trio reached Stirling the peloton uped the pace reeling them in before the final 20 kilometer circuit.

Australian Calvin Watson (Trek Factory Racing) and Danilo Wyss (BMC Racing) then tried to escape but it wasn’t to be and they were soon back in the bunch.

Thursday’s 143 kilometer Thomas Foods Stage 3 is expected to shake up the race as the riders depart the inner-city suburb of Norwood, head out through the Adelaide Hills orchards and vineyards to a hilltop finish in Paracombe.