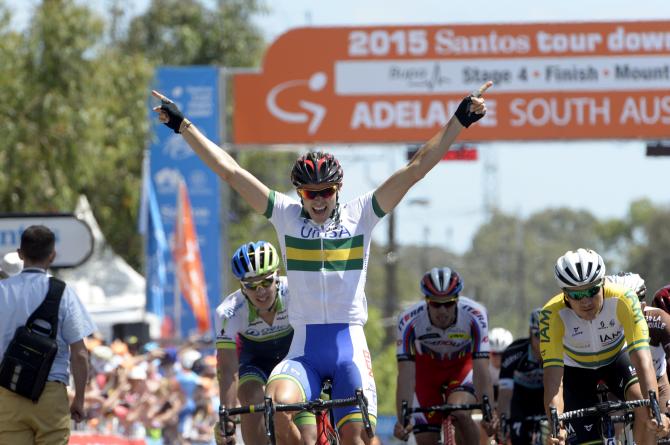 Australian Steele Von Hoff grabbed the victory at the end of a crash marred finish of Bupa Stage 4 in Mount Barker.

Von Hoff crossed the line at the end of the 144.5 kilometer stage from the beachside suburb of Glenelg in a time of 3:24:28 holding off South African Daryl Impey (Orica-GreenEDGE) with Dutch rider Wouter Wippert (Drapac Professional) third.

The 27 year old Victorian gave the UniSA-Australia national team its second stage win of the week. The first was that of Jack Bobridge who claimed early glory on stage one and today played a pivotal role in the action.

“Jack Bobridge was looking after me,” said Von Hoff. “He was telling me ‘be patient, be patient’. I trusted him and he delivered me where I had to be.

“He told me to mark (Etixx) Quick Step (team) because (Mark) Renshaw was there and I managed to find my way to victory.”

Von Hoff, who raced with World Tour team Garmin-Sharp in 2013 and 2014 lost out when the team merged with Cannondale and is this year on the roster of British registered continental team NFTO.

“My goal is to get back into the World Tour,” said Von Hoff. “The merger between Cannondale and Garmin left me behind this time but this win today will help me to go back to the highest level.”

Sixty-eight riders had regrouped at the front as the race swept onto Flaxley Road for the sweeping downhill finish. Massed across the road the peloton hurtled into the final kilometre but 150 meters from the line a touch of wheels brought most crashing down. Only ten sprinted clear with the rest caught up in and behind the wreckage.

Under race rules riders involved in a crash in the final three kilometres are not penalised so all were given the same race time as Hoff, even though some walked across the line with their bikes to ensure they could start tomorrow.

The stage result did not impact overall standings with BMC Racing’s Rohan Dennis still in the Santos Ochre Leader’s Jersey by a seven seconds over his team mate Cadel Evans. Dutchman Tom Dumoulin (Giant-Alpecin) is third overall, nine seconds off the lead.

The day began with a flurry of attacks as teams tested the resolve of BMC who were up to the task and countered any dangerous moves to protect their race leaders.

As they rode clear to a margin of close to two minutes Bobridge became the race leader on the road and that made him a marked man.

But his eyes were on the Subaru King of the Mountain contest that today was a category two climb up Sellicks Hill, 44 kilometers into the stage.

He made sure he grabbed the maximum points on offer over the top of the climb to take over the lead in the polka dot jersey competition.

Behind him on the climb was Hepburn then Kennaugh and Pineau and by then the group’s advantage was down to 1:30 as BMC powered the chase.

“It was a very hard race at the start,” said Bobridge who returned to the bunch after the climb.

“I saw the opportunity to go up the road for the KOM competition, so I did but as soon as I collected the points, I dropped back to the bunch to repay Steele for his help in the first few days.

“Everyone was going crazy before the (final) sprint so I told him to stay calm and relax,” explained Bobridge. “He did a perfect sprint for himself. He just shows his classiness.

Once Bobridge sat up the leaders should have had a better chance of staying clear but disunity in the trio and the increased chase pace from BMC conspired against them.

“The cooperation wasn’t good,” said Pineau. “Bobdridge was up there only for the KOM. Then Hepburn stopped contributing because his team-mates wanted to do echelons at the front of the peloton.

“Kennaugh stopped riding too so I just remained alone at the front,” he said. “I continued but with no illusions. It’s frustrating to fight so hard for a breakaway with people who actually don’t want to stay away.”

The first of the day’s two iiNet Sprints was contested at Ashbourne, 90 kilometers into the stage, and it was Impey who collected the top points and the three second time bonus to move him up to fourth overall at 13 seconds. Luke Rowe (Team SKY) and Mark Renshaw (Etixx QuickStep) followed behind.

After the sprint Astana’s Ruslan Tleubayev, Maxim Belkov (Katusha) and Pieter Serry (Etixx QuickStep) skipped away to a lead of more than two minutes and contested the second iiNet sprint at Macclesfield, less than 30 kilometres from the finish line. Belkov took the points ahead of Tleubayev with Serry third.

Then Movistar kicked into gear for their sprinter Juan Jose Lobato Del Valle and the pace split the peloton. Missing out in the maneuver was sprint favourite Marcel Kittel (Giant Alpecin) who would eventually finish well behind the stage winner.

As the race headed into the final ten kilometers the chase had caught the escapees and that sparked a counter-attack by former Tour Down Under winner Luis Leon Sanchez Gil (Astana), team mate Lars Boom and Gorka Izaguirre Insausti (Movistar).

But Orica-GreenEDGE shut them down and it was then up to the sprinters to battle for the win.

Tomorrow is the Queen stage where the race is traditionally decided on the slopes of Old WIllunga Hill.

BikeExchange Stage 5 is a 151 kilometer course that begins in beautiful Mclaren Vale and loops along the coastal holiday strip of Aldinga Beach three times before turning for the first of two ascents of Old Wilunga Hill, the second time to finish the stage.