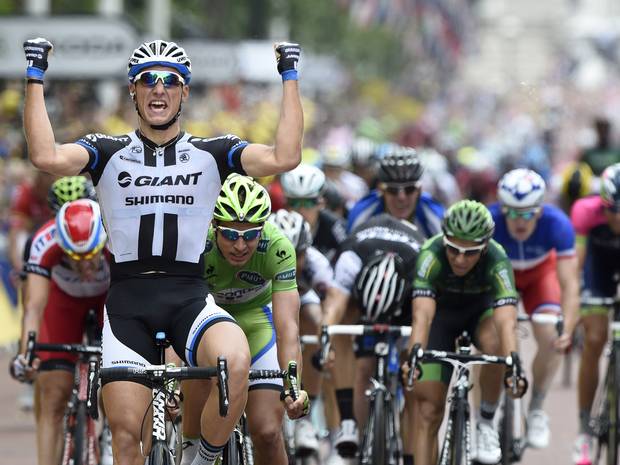 Today’s stage marked the second victory for Marcel Kittel, as the German powerhouse outsprinted Peter Sagan on The Mall in London. It was a brilliant and huge victory as he won by a mere bike length over the Slovakian rider.

Meanwhile, Vincenzo Nibali managed to retain his hold on the yellow jersey, after winning yesterday’s race with a well-timed attack during the waning moments of the stage.

Bideau the first attacker of the day

For the third consecutive day, a rider from Bretagne-Séché Environnement was the first attacker as soon as Tour director Christian Prudhomme flagged off the race. After Benoît Jarrier on stage 1 and Armindo Fonseca on stage 2, it was the turn of Jean-Marc Bideau who had showed up in the middle of the superstars (Vincenzo Nibali, Peter Sagan, Alberto Contador, etc.) in the neutral zone as his mission was to not miss the first breakaway of the day. Only one rider managed to accompany him: Czech national time trial champion Jan Barta from NetApp-Endura. The leading duo was therefore formed of 30 year old riders taking part in the Tour de France for the first time and keen to enjoy riding ahead of the bunch in front of the enormous British crowd.

Barta and Bideau got a maximum lead of 4.15 at km 33. The Astana team set the pace of the peloton for a while as a mark of respect to the yellow jersey worn for the first time by Vincenzo Nibali. Soon the sprinters’ teams took over with Lotto-Belisol giving an indication of André Greipel’s ambitions but the most seen rider was China’s Ji Cheng who stayed true to his nickname “breakaway killer” as he kept the race under control for a bunch gallop highly wanted by his leader Marcel Kittel. Jérémy Roy for FDJ.fr eventually came in help with 60km to go as French champion Arnaud Démare also eyed another victory in London eleven months after he claimed the first Ride London Classic.

Barta rode as a time trial specialist in the last ten kilometers. Bideau got caught by the peloton eight kilometers before the end. Barta insisted for two more kilometers. Omega Pharma-Quick Step was the first sprinters’ team in action with Tony Martin putting the hammer down with 4km to go but soon Giant-Shimano showed their superiority. For a little while, Marcel Kittel lost his train but Tom Veelers brought him back in the slipstream of his lead out man Koen De Kort. On The Mall, his power spoke for him. He turned his turbo on. Peter Sagan couldn’t even put his front wheel on the side of the German fast man. It’s Kittel’s sixth stage win at the Tour de France, so he’ll ride tomorrow with a “V6” mark on his frame plate number below the name of water supplier Vittel.