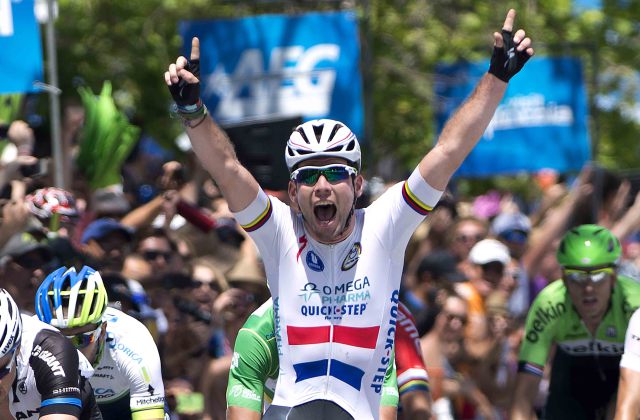 The British rider was part of a select group of sprinters containing Sagan and Juan Jose Lobato – as the race entered into the final 500 meters.

Initially, Cavendish was fifth in line, while Sagan and Sacha Modolo battled it out shoulder-to-shoulder behind him. And, with 200 meters remaining, Sagan proceeded to come around the leaders and open up his sprint.

At that point, it appeared as though Sagan had the impetus to seize the victory, However, with just 100 meters left, the "Manx Missile" unleashed one of his signature accelerations -that left Sagan and others struggling in his wake.

Cavendish and Sagan were later seen shaking hands after the stage, with Sagan remarking to Cavendish – “That was fun, huh?”

Cavendish later described his victory in a interview.

“It wasn’t so easy, it was a headwind finish,” he said. “It was very chaotic in the peloton, a lot of teams were trying to get it right. Mark Renshaw led me around. I waited even though the others jumped … and I was able to hold on to the finish.”

Meanwhile, Tony Martin managed to retain his grip on the overall race lead, with a 6-second gap over Tom Dumoulin (Giant-Shimano) and a 10-second advantage over Sagan.

In other news, a crashed occurred during the beginning of today’s stage that claimed Lotto-Belisol’s Jelle Vanendert as one of it’s victims.  As a result, Vanendert was forced to abandon the race.

In addition, a later incident at the start of the 28 kilometer finishing circuit, involved Bradley Wiggins (Sky) and a rider from the CCC Polstat squad, wherein both riders crashed into some fencing.

Wiggins managed to remount his bike and rejoin the race- albeit with obvious signs of pain.

“Sir Bradley Wiggins has crashed at the #TourDeSuisse. He took a bang to his right leg but he’s back on his bike. 24.5km to go.”