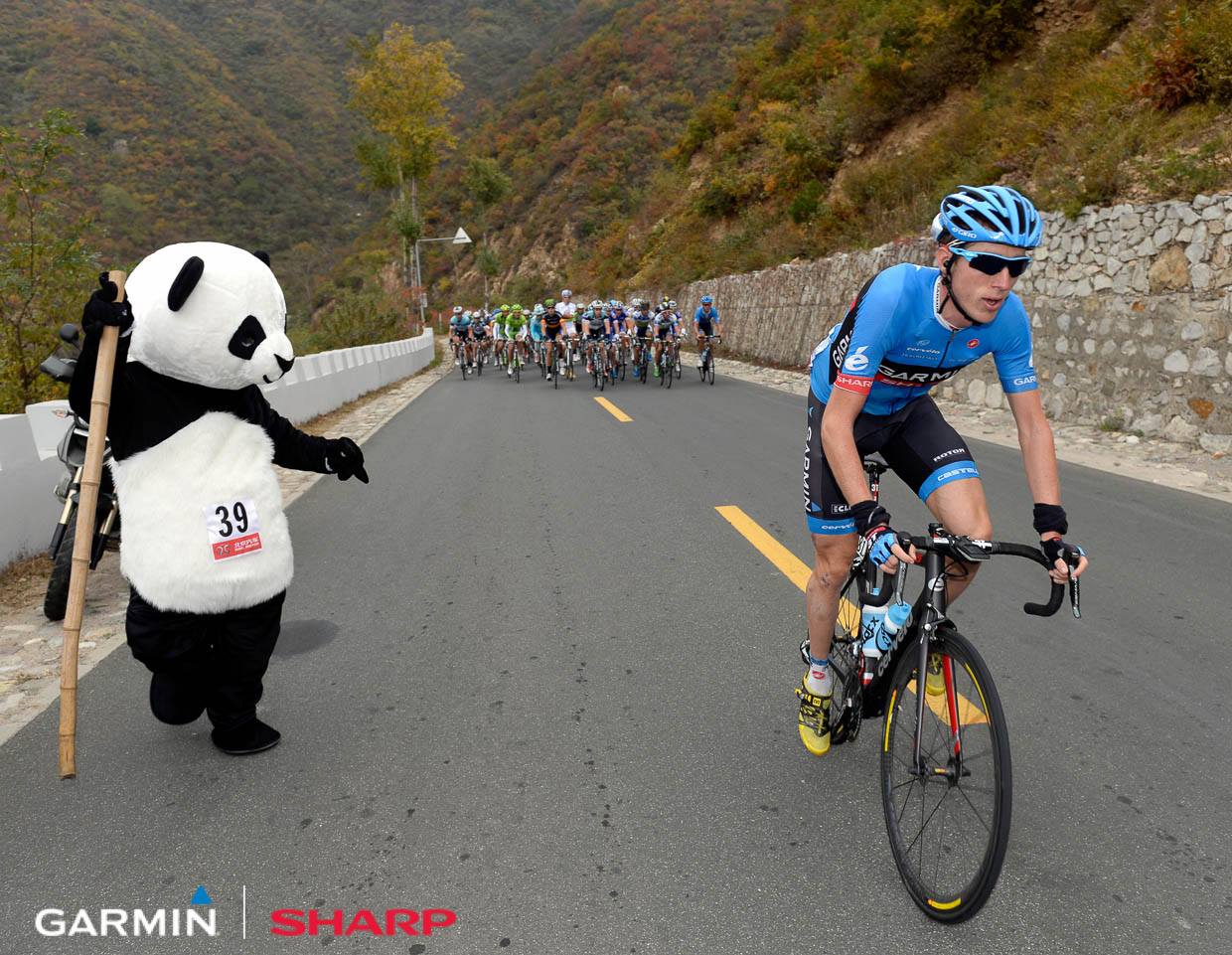 excerpts from Tour of Beijing.com
It was the closest of finishes but Philippe Gilbert (BMC) has managed to hold onto the overall lead at the 2014 Tour of Beijing with Dan Martin reigning supreme on the mountain-top finish for the 157km Queen stage of the final WorldTour event of the season.

Martin crossed the finish line at Mentougou Miaofeng in a time of 4:12:14, just two seconds ahead of a charging trio of Johan Chaves (Orica – GreenEdge), Gilbert and Rui Costa (Lampre-Merida).

Starting the day 11 seconds behind Gilbert in the General Classification, Martin needed real time plus the former world champion to finish further down the standings to take the red jersey.

“It’s the way it is,” said Martin at the finish. “I’m just happy to win the stage. I’ve been twice second in stages of this race and second overall last year so it’s just nice to be able to win a stage.”

Martin’s victory was set up by a long solo effort from teammate, Ryder Hesjedal who attacked with around six kilometres to go on the final climb after an early break was reeled in and the selections began to take place.

“I was a bit surprised when Ryder went but he’s had good legs all week as well and he had to try,” explained Martin. “With the headwind, it was the only way to do it.”

Gilbert’s form has been on show for all to see this week with the Belgian claiming victory on Stage 2. Martin explained that he was not surprised that Gilbert was able to make the final selection on the definitive climb.

“I knew it was going to be a headwind on the climb,” Martin said. “It’s not that hard of a climb. It’s a big chain ring for a lot of it and we’re going at 30km/h so it’s not really a climber’s climb at all.”

Gilbert will take a three second advantage over Martin into Tuesday’s final stage with Chaves a further six seconds back. It’s a lead that Gilbert is confident of holding on to.

“You never know, you can have a technical or something but I’m in a safe position I think,” he said.

The break tries their luck

Luka Mezgec (Giant-Shimano) made the most of the fact that it took a number of skirmishes from the front of the peloton for the eventual day’s break to form, scooping up the points on offer at the first intermediate sprint of the day at kilometre 12. Finishing ahead of Daryl Impey (Orica-GreenEdge), Steele Von Hoff (Garmin-Sharp) and Gilbert, Mezgec took the lead in the points classification by just one point ahead of Tyler Farrar (Garmin-Sharp).  The green jersey needing one more day to be decided.

A group of four breakaway riders escaped the peloton at the 25km mark, getting a head start on the five categorized climbs before the finale. Guillaume Boivin (Cannondale), Graeme Brown (Belkin), Boris Vallee (Lotto Belisol), and Julien Vermote (Omega Pharma QuickStep) built up a lead of over four minutes on the bunch. Vermote, starting the day at 21 seconds, the virtual leader on the road.

With 35km to go and on the climb to the penultimate KOM, Brown was the first to fall back from the breakaway with BMC and Garmin-Sharp sharing the pace-making. Vermote, in an effort that would earn him the nod as day’s most aggressive rider, gradually shook off his remaining breakaway companions, maintaining a solo lead over the peloton over the bottom half of the 12km climb to Mentougou Miaofeng.

Lotto-Belisol neo-pro Louis Vervaeke was next to fire off a shot, with the Tour de l’Avenir stage winner opening up a 10 second lead over the bunch lead by Dario Cataldo (Team Sky), Adam Hansen (Lotto-Belisol), and Hesjedal. The pace was enough to end any momentum of defending champion, Benat Intxausti while BMC’s Gilbert and Sanchez bided their time towards the back of the selection.

With Vervaeke unable to maintain his pace, Hesjedal made his move, ever watchful on any action happening in his rear view.

“I figured I’d try to take a chance because you never know until you get out there,” explained Hesjedal after the finish. “I could do an effort and force the other guys to work and not just give them a free ride and from the looks of it, that really helped Dan. He could be relaxed and put the race on everyone else.”

The 2012 Giro d’Italia winner did everything to maximize his advantage, even emptying out his water bottles on his way to a 14 second lead over the chase with four kilometres remaining.

An attack from Ricardo Zoidl (Trek Factory Racing) and Pieter Serry (Omega Pharma – Quick-Step) helped to whittle down Hesjedal’s gap, with around 15 riders left in the bunch. Hesjedal, all the while looking at the action behind him, would have been pleased to see Martin move into second wheel, with the Zoidl, Serry move nullified and Chaves at the front of the pack with two kilometres to go.

“Unfortunately there was a lot of guys willing to ride the front and get him back,” explained Martin. “It did make my life easier because it made me relax and it was a lot different race to last year where everybody was just attacking and stopping.”

As Hesjedal was caught, it was the Beijing Olympic Champion Sanchez was the next on the front, with Martin playing a waiting game until just 300 metres remained when he went for broke with a sprint to the finish line.

“The GC would have been a bonus but the guys rode incredible all day – all week in fact they’ve been incredible – it’s unfortunate to miss the GC,” the Irishman admitted. “Obviously anything can happen tomorrow but, other than bad luck I think Philippe’s got the GC. I’m still happy with second place .”

The run to second place by Chaves put the Colombian into the white jersey with overnight leader in the young rider classification, Jesus Herrada (Movistar) finishing nearly three minutes down on Martin.

Gilbert said he was looking forward to tomorrow’s final stage of the final edition of the Tour of Beijing, which starts from Tiananmen Square before 12 laps around the Bird’s Nest.

“That’s pretty special because I’m happy to be here,” the Belgian explained. “At the beginning I was thinking ‘I don’t want to go there, it’s a long trip and the season has been long and so on’. But now I’m there and I enjoy the race, it’s a nice country when the sky is clear. It’s a nice experience.”

Gilbert was particularly looking forward to the stage start opposite the Forbidden City.

“It’s great to have these roads closed for us,” he said. “It’s a big experience. It’s a little bit like riding on the Champs Elysees with the Tour .”