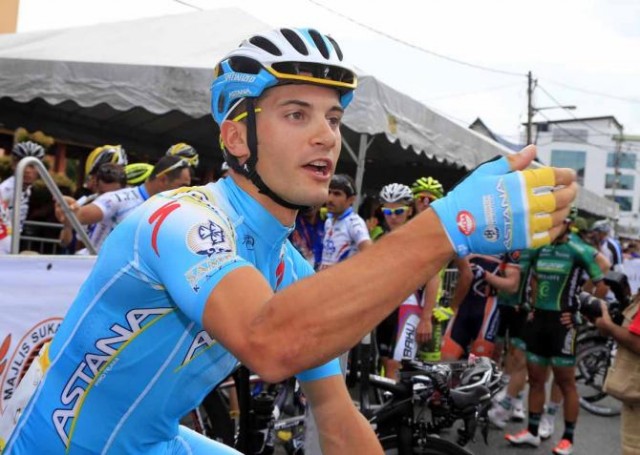 The first stage of the Eneco Tour started and finished in Terneuzen. As is often the case near the seaside, strong winds play their part in today’s stage. Which serves the Flemish and Dutch teams very well as they know how to handle such weather conditions.

Yet there were riders who did not want to be drawn into echelons. Who else but Laurens De Vreese attacked first. His teammate Björn Leukemans did not start. He had bowed out over illness.

Gediminas Bagdonas tried to bridge the gap, but the AG2R rider never closed in on De Vreese. He powered on, away from the pack and took two minutes in no time. Two riders did succeed in joining De Vreese: Along with Kenneth Vanbilsen, Gatis Smukulis bridged the gap. The lead of the three leaders quickly increased to five minutes and not long after even nearly ten minutes. The wind played a major role.

However, the leaders did not work together well. Smukulis even broke away from his companions, but that did not last long. The three realized that only togethery they could stay ahead of the peloton the longest. In the peloton mainly FDJ and Lotto-Belisol were working for Nacer Bouhanni and André Greipel.

Which meant the leading group never really got away. The wind wasn’t blowing that hard, so no echelons formed either. A sprint was in the making. With Omega Pharma-Quick-Step, BMC and Lotto-Belisol enough teams were pulling the pack.

With roughly 40km left, Team Sky pulled the back so hard the peloton broke up into several groups. Yet to no avail. With only 18 km left the last leaders, De Vreese and Vanbilsen, were reeled in by the peloton.

A sprint was in the making. Several teams were pulling at the front. However, fast men Sacha Modolo and Matthew Goss crashed hard 10 km from the final straight line. Danny van Poppel lost out on his chances by a crash too.

In the final kilometer Mirko Selvaggi tried to stay clear from the peloton, but Tom Dumoulin reeled him in and powered on. The Dutchman stranded with only 20 meters left. Eventually Andrea Guardini claimed the sprint victory. He was ahead of Yohann Gène and Davide Cimolai. Belgian champion Jens Debusschere claimed fifth.