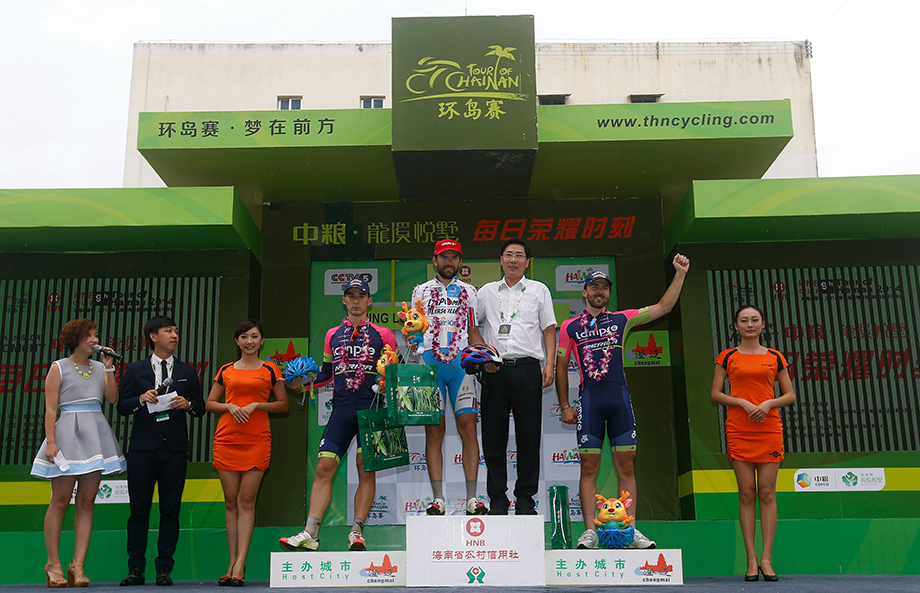 On the hunt for a contract for next year, Frenchman Julien Antomarchi of La Pomme Marseille brilliantly rode to a solo victory, after crossing the finish line a mere one second over the ensuing peloton in Xinglong today. His courageous effort during torrential rain also earned him the yellow jersey.

“In first place, I intended to have a quiet day in the bunch”, Antomarchi explained.

“I’ve missed out on that one! I went on the attack and found myself in a front

group of three riders. We didn’t get much of an advantage at the beginning so we were wondering if it was worth carrying on. At the first intermediate sprint, we had three or four minutes lead, which was not enough but it went up to eight. With 40km to go, we accelerated. The Baku rider punctured, we couldn’t afford to wait for him, then the Italian struggled in a little climb so I was left by myself for the last 25km. I gave everything and I preserved a very little advantage on the line. I’m very happy to get the stage win and the yellow jersey.”

The time bonus Antomarchi collected during today stage, was enough to wrest the green jersey from Andrea Palini in the general classification.

Another typical sprint finale was expected in Xongling, but today’s stage  once again had an unexpected winner, from an obscure team and a different nationality.

“I’m a bit frustrated”, said Palini who won the sprint behind the Frenchman. “We could have done better. Considering the whole work we’ve done, we deserved to win but the guy alone at the front has been brave too. We’ve ridden in order to close the gap but Belkin only came to the front with 3km to go. We’ve been helped by the team of the leader . With the heavy rain in the last hour, the road was a bit dirty and we were scared to slip in the finale. Actually, there was a bit of mistake by some riders in the last curve, not by us because we were well informed, but others went the wrong way. It might have cost the win.”

“It’s a missed occasion even though it’s a nice result to have two Lampre-Merida riders on the podium”, third placed Niccolo Bonifazio commented. “We’ve done the last 30km at 50km/h, maybe even more. We couldn’t ride faster. Ferrari sprinted till the 200m to go mark, then I led Palini out for him to take the yellow jersey but we didn’t manage to get it. The rain has been a factor in favor of the Frenchman in the lead. But this race is pleasant and we’ll try to do well in the harder stages.”

Previous race leader, Wang Meiyin, hinted he was not disappointed by losing the yellow jersey.

“I’m happy with the effort my team put in defending the jersey”, said the rider from Shandong. “My coach planned for me to save energy for the intermediate sprints and the final one but the French rider at the front was very strong.”

Meanwhile,
Antomarchi found glory in his second participation to the Tour of Hainan.
“The race is improving”, the 30 year old mentioned. “In 2011, there was only one Pro Team, Astana, now there are three. The level of the race has increased, so has the level of the Chinese riders. It makes it a beautiful race and a beautiful victory for me. I didn’t know where I was at in terms of condition as I crashed in Paris-Tours before coming here. Logically, I should lose the yellow jersey tomorrow through the time bonus but the overall classification remains widely open.”