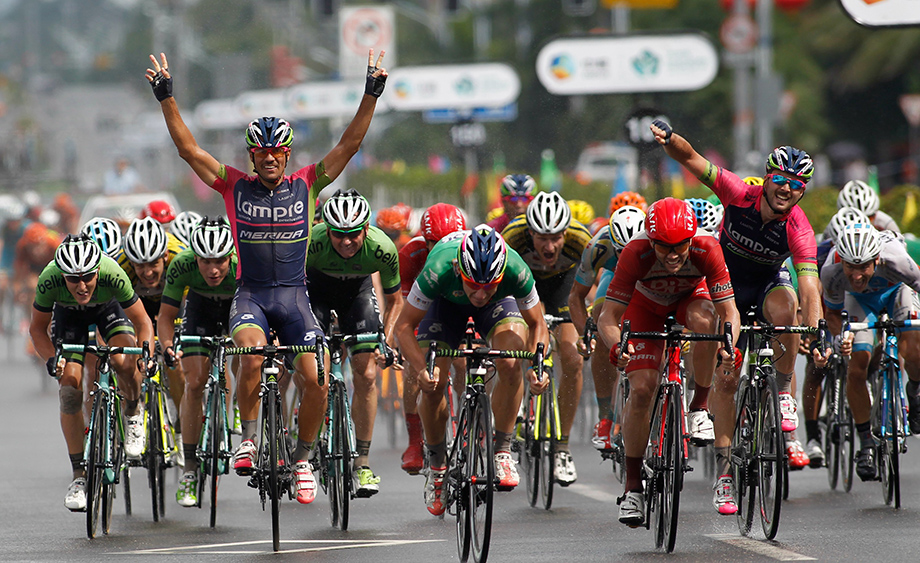 Lampre-Merida’s Niccolo Bonifazio is definitely the revelation of this year’s Tour of Hainan. The Italian rider will be able to celebrate his 21st birthday in style this week, as he added a third stage win to his record on the Chinese island and moved into second place overall behind race leader Julien Antomarchi.

“It went well today”, Bonifazio reacted in Danzhou. “I thought the stage would be with no major difficulty but it turned out being a difficult day of racing with a hill to start with, the rain and some attacks. Until 15km to go, there was a breakaway and a rider from CCC Polsat counter attacked but my team-mates Matteo Bono and Xu Gang brought him back. Manuele Mori did the last bit of work until Roberto Ferrari delivered us, Andrea Palini and myself, 150 metres from the line. It was nice to have this long straight finish. It has helped me a bit because I didn’t have great legs.”
Bonifazio went on the attack from the start as there were time bonuses up for grabs. Mori was with him up the road, so were José Gonçalves and Julien El Farès from La Pomme Marseille, Victor Nino (RTS), Alexandr Dyachenko and Andriy Zeits (Astana) as well as Branislau Samoilau (CCC Polsat). “We were racing for the time bonus as this is how the second place on GC is going to be decided”, Zeits explained afterwards. “But now it’ll be hard for me to get back into the runner up position as the last stage suits the sprinters.”
Having understood the short-term motivation of the breakaway riders, Antomarchi didn’t panic. “It’s always difficult to start a stage with a climb but we had two riders in the breakaway, so we knew that we’d pull them back”, Antomarchi said. “Four team-mates of mine were still with me to bridge the gap.”
Bonifazio took the first intermediate sprint (3 seconds) after 22km of racing and 10 seconds on the finishing line. “But he had to take all intermediate sprints and stage wins of the last two days for beating me”, Antomarchi calculated. “So if nothing wrong happens to me tomorrow, I now have a good chance of winning the overall classification.”
Once Bonifazio and Zeits were back in the peloton, Dario Hernandez (Burgos BH), Alexandr Shushemoin (Vino4ever), Elchin Asadov (Baku) and Samoilau rode away and got an advantage of 3.50 at km 106 but the race was under control by La Pomme and Lampre-Merida by then.
Stage 9 from Danzhou to Chengmai will conclude the ninth Tour of Hainan on a 165.7km long course.