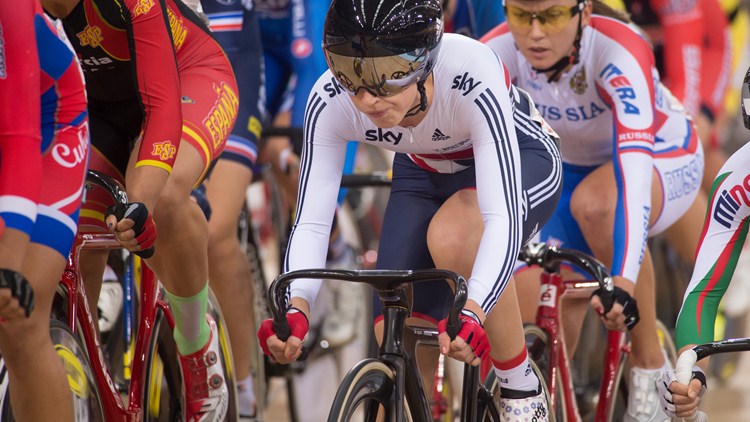 After having won the Team Pursuit, Laura Trott proved that she was indeed the boss of the Omnium. The British rider rode to victory in the Scratch and the Pursuit, finished in second position in the Elimination race, completed the 500 metres in third place, and finally fifth place in the Flying Lap. She finished the Omnium with 193 points, against 181 points for the Belgian girl Jolien d’Hoore and 167 points for the Dutch rider Kirsten Wild. After her victory, Trott commented: “When you are winning often, the spectators expect to see you out in front at each race. And this situation isn’t easy.” This victory had a particularly sweet taste for her: “It’s amazing to race in front of a home crowd. It really boosts your confidence to win again here in London, two years after my Olympic medal.” This Winter looks indeed very promising for the British rider.

Overall ranking
The Belgian rider Jolien D’Hoore is leading in the UCI Track World Cup with 295 points. The Cuban girl Marlies Garcia Mejias is in second position with 240 points, while Wild from Holland is provisionally in third place with 225 points.

Men Omnium: Fernando Gaviria triumphs
UCI Junior World Champion in the Omnium, Fernando Gaviria hasn’t taken long to become part of the Elite riders. Fourth in the Scratch, winner in the Pursuit, third in the Elimination race, and second in both the Kilometre and the Flying Lap, the 20-year-old Columbian won the UCI Track World Cup in London with 197 points. Behind him, the gaps were significant: the Australian Scott Law and the American Bobby Lea have 171 points and 164 points respectively.

Overall ranking
Third in Great-Britain, Bobby Lea now has a good chance of victory in the overall rankings. Before going into the final at Cali (16-18 January), he has 240 points against 179 points for the Danish rider Casper Phillip Pedersen and 150 points for Gaviria.

Overall ranking
Barring incidents, Shuang Guo should be lifting the UCI Keirin World Cup trophy next month in Cali. After two successes in two rounds, the Chinese rider is way ahead with 300 points. We could even witness a Chinese double, as Tianshi Zhong of the China 361° Cycling Team is second with 233 points. Finally, the Australian Anna Meares (Jayco AIS) is in third place with 202 points.

Overall ranking
Fabian Puerta could well win the UCI Track World Cup next month on home ground in Cali. Going into the final, he has 255 points, against 224 points for the Australian Matthew Glaetzer. The German Robert Forstemann, for his part is credited with 187 points.