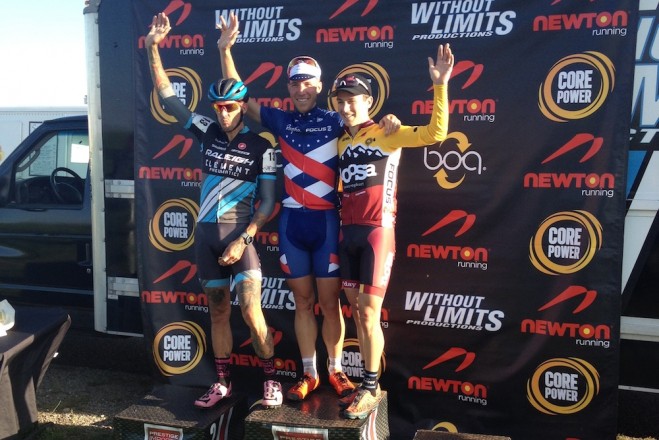 Jeremy Powers (Aspire Racing) won the elite men’s US Open of Cyclocross today, after taking the hole shot and subsequently unleashing a blistering attack on the final lap – to claim a solo victory.

“I’m definitely a little tuckered still from Vegas — not even from the race, just all the things that happen at was feeling the same way. I wasn’t feeling super, but it was enough to allow me to put down some power and the sharp stuff I was still able to kind of capitalize a little bit. It was a good race.”

The first lap saw Powers take the lead with Berden and Krughoff in tow, followed closely by Jeremy Durrin (Neon Velo) and Jamey Driscoll (Raleigh-Clement). However, by the end of the lap, Krughoff’s efforts at the front served to pull Powers and Berden away from the group – giving the three riders a 10-second lead going into the second lap.

However, Powers briefly lost time with his breakaway companions, after getting caught up in some barrier tape. But, that didn’t prevent him from quickly reestablishing contact – especially after Krughoff slid out in a corner along the start/finish pavement.

This mishap sent Krughoff into the pits to get a second bike, which led to Powers and Berden gaining ground on their rival.

“Unfortunately, Jeremy started going for it just as I had to pit,” Krughoff said. “I got a bike change and jumped on the other bike, and I don’t think we had the tire pressure totally dialed. That one seemed a little higher, less comfortable around the corners, so I lost a bit more time. Got back on the other bike and got back into the rhythm, but by that time it was a 15-second gap. I knew that maybe if I went all-all in I could catch Ben, but then we have to race tomorrow.”

As the race headed into the end of the fifth lap, Powers and Berden had stretched their lead to 12 seconds over Krughoff. However, as Powers turned to Berden to take up the lead, there was no response from the Belgian. From there, Powers attacked through a series of switchbacks in the opening second half of the course. Krughoff, again lost ground after another bike swamp – leaving him 20 seconds adrift from the leaders.

Back in the field, Shawn Milne (Boulder Cycle Sport-YogaGlo) attacked the eight-man group he was riding in, taking Troy Wells (Clif Bar) and Jake Wells (Stan’s No Tubes) with him.

Heading into the last lap, Powers went on the attack, creating more distance between him and Berden through each corner. And, as he approached the line, Powers had built up enough of a lead, to cruise across the finish line with 25 second advantage.

Despite Caroline Mani (Raleigh-Clement) winning the hole shot, and leading for the first lap, Compton took over halfway through the second lap – and never looked back.

“It’s hard riding in fourth or fifth. It’s so bumpy out there. There’s so much rubber-band effect,” Compton told the press. “I attacked, just thought I’d put an effort in. And I got a gap. And once you’ve got a gap, you’ve gotta commit.”